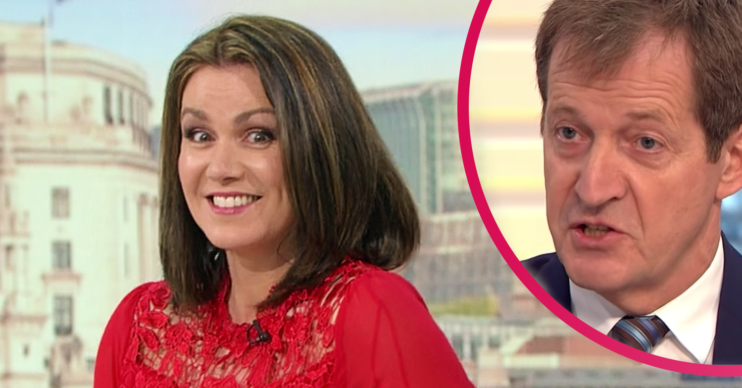 GMB: Alastair Campbell to co-host with Susanna Reid next month

It's set to be an interesting three days in May!

GMB is to welcome in Alastair Campbell as a new guest co-presenter next month.

The controversial former Labour spin doctor will be in the hot seat from Monday May 10.

When is Alastair Campbell co-presenting GMB?

Sixty-three-year-old Alastair is a sworn enemy of former GMB host Piers Morgan, and will sit in his old chair for three mornings.

He’ll co-present with Susanna Reid during Mental Health Awareness Week, a cause that Alastair is passionate about.

“… as Good Morning Britain has always championed good mental health,” he said in a comment.

“…as well as brushing up my knowledge on some of the subjects that will take me out of my comfort zone.”

He continued: “In addition, there is an element of finishing unfinished business here.

“Back in the mid-90s I was a regular presenter of the paper reviews on BBC Breakfast and during the week the former Labour Leader John Smith died, I was in discussions with the programme about becoming a presenter.

I must admit I am slightly dreading – make that totally dreading – getting out of bed in the middle of the night to get ready to present the show.

“I must admit I am slightly dreading – make that totally dreading – getting out of bed in the middle of the night to get ready to present the show.

“But I am really looking forward to it.”

A spokesperson for GMB said: “A regular panelist on the show who always provokes strong reactions and lively debate, to some he is the architect of spin.

“To others he is one of the few people in the country able to call things out as they are – something we welcome on GMB.”

Read more: GMB: Susanna Reid breaks down over death of Jimi Olubunmi-Adewole who tried to save woman from Thames

In a recent Twitter spat, Alastair called former GMB presenter Piers a “wimp” and a “creep”.

Now Alastair will be sitting in the very seat his sworn enemy once sat in.