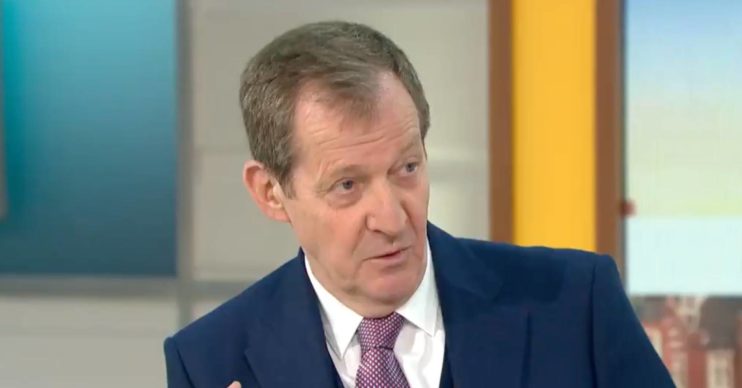 GMB: Alastair Campbell gets a mixed reaction from viewers

Some viewers were "annoyed" but others felt he lifted the show

Alastair Campbell made his debut on GMB as a presenter today (May 10) – and got a mixed reaction from viewers.

The former spin doctor is filling the gap left by ex host Piers Morgan as a guest presenter until Wednesday.

And while many viewers were glad to see the 63-year-old sitting alongside Susanna Reid, not everyone was happy.

Why is Alastair Campbell on GMB?

However, Alastair is not a permanent replacement for Piers. And despite taking Piers’ old seat, Alastair is hardly his predecessor’s biggest fan, having clashed with him many times on the show as a pundit.

Alastair has also previously branded Piers a “wimp” and a “creep” on Twitter.

Others who have filled in since Piers’ controversial departure include Alex Beresford, Ben Shephard and Adil Ray.

How did Good Morning Britain viewers react to Alastair Campbell?

While many thought Alastair brought an air of professionalism to the show, others found his presence grating.

Indeed, two particular characteristics of Alastair on screen particularly seemed to irk those observers not so keen on him.

What did viewers object to?

One social media user became so distracted by Alastair’s ‘fidgeting’ that they moaned it was “annoying”.

Meanwhile, another said: “Alastair  Campbell is just awful, he is muttering.

“Can hardly tell what he is saying – not good viewing. Susanna Reid is still brilliant, but give her a better co-presenter please!”

A second person chimed in: “I struggle to make out his words too. Bit mumbly.”

And a third proclaimed: “GMB is light-hearted fluff and it’s usually regular background noise to our morning routine. However there are limits since Mr Campbell’s voice equates to a dentist’s drill. Thanks but no thanks.”

Alastair Campbell and @susannareid100 kick off the show discussing the latest shadow cabinet reshuffle and the SNP’s plans for a second independence referendum.

However, not everybody was turned off by Alastair being on the show.

Some felt the journalist elevated the standard of debate daytime series, particularly as he suggested the Prime Minister should be referred to more seriously, rather than the matey ‘Boris’ he goes by.

One impressed viewer tweeted: “I hope Alastair Campbell is going to be permanent fixture on GMB. A professional.”

Another added: “Can we keep Alastair Campbell please, GMB?”

A third person who was won over admitted: “I was dreading Alastair Campbell on GMB but he has made some good points.”

And one person predicted the fill in could even eclipse the show’s former star.

“Alastair Campbell is excellent, he will be better than Piers,” they claimed.