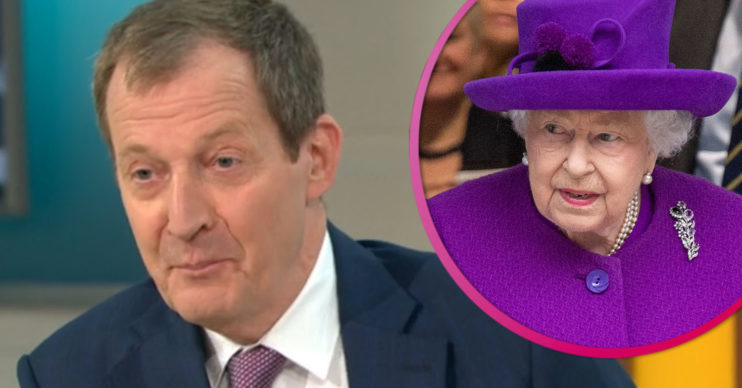 The presenter has been hosting the ITV programme this week alongside Susanna Reid.

Viewers have had a mixed response to Alastair, and today’s gaffe left many unimpressed.

Alastair corrected himself after he accidentally got Her Majesty – who is very much alive – mixed up with her late husband Prince Philip, who passed away last month.

What happened on Good Morning Britain with Alastair Campbell?

During a discussion on the show, Alastair said: “We talked a lot about Prince Philip after the death of the Queen.”

After a few moments, Alastair addressed his mistake and corrected himself on air.

He added: “Can I just say something, I think I may have accidentally announced the death of the Queen.

“I meant Prince Philip of course.”

Susanna said: “I think people understood exactly what you meant.”

Viewers shared their thoughts on the gaffe, with some people unimpressed.

One person said on Twitter: “OMG Turn your volume up. I very much doubt that Piers [Morgan] would have got this wrong. ‘Death of the Queen’ listen,” alongside a clip.

Another wrote: “According to Alastair Campbell the Queen died!!!” followed by a shocked face emoji.

A third tweeted: “At least @piersmorgan doesn’t get confused and say death of the Queen instead of death of Prince Phillip @GMB.”

However, others realised Alastair’s mistake and took it light-heartedly.

One said: “Alastair Campbell just accidentally announced the death of the Queen on #GMB.”

Another added: “@campbellclaret accidentally announces death of the Queen! (He did apologise).

“Queen calls up GMB to confirm she is still very much alive!”

According to Alistair Campbell the Queen died !!! 😳😳 #gmb

@GMB OMG Turn ur volume up . I very much doubt that piers would have got this wrong. “Death of the queen” listen pic.twitter.com/0TPqgtVFuY

Alastair hosted the show from Monday to Wednesday this week following the departure of Piers Morgan in March.

Many viewers have loved the chemistry between Alastair and Susanna.

One said on Twitter: “Will you be back, Alastair? Yours and Susanna’s pairing works brilliantly!!”

Another tweeted: “Keep Campbell on the show him and Reid are the best pair since Morgan left.”

Did you enjoy watching Alastair on GMB? Leave us a comment on our Facebook page @EntertainmentDailyFix and let us know.