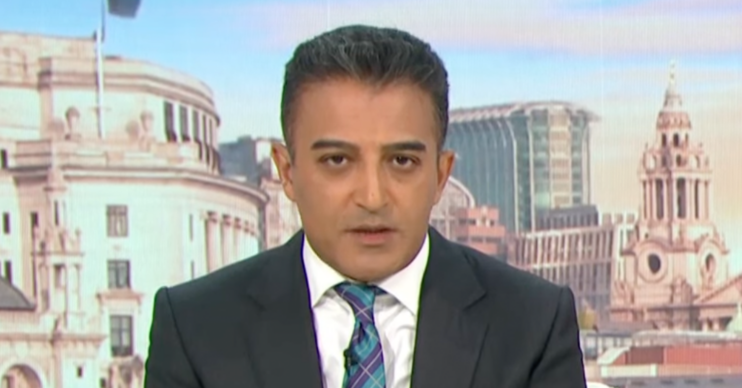 GMB: Adil Ray criticised over controversial comments about war in Ukraine as viewers point out ‘error’

Fans of the show got pretty irate

GMB host Adil Ray was criticised by viewers today (April 20) over comments he made about the war in Ukraine.

Adil hosted the show alongside Kate Garraway today, who herself made headlines for a sly dig at Prince Harry‘s new interview.

She said that she thought Boris Johnson should step down over “party gate”.

However, Adil put across the other argument that perhaps now isn’t the best time due to the on-going war in Ukraine.

Read more: Adil Ray claps back at troll as they tell him to ‘stick to Lingo’

And what was most likely a slip of the tongue by the presenter was quickly picked up by viewers.

He said: “We are effectively in a war with Ukraine and Boris Johnson has developed a trusting relationship with President Zelensky.

“If that was to change, Zelensky would have to build that relationship up with Dominic Raab or whoever it might be.

“So there is an argument to suggest when you’ve got that kind of stability between Britain and Ukraine at a very critical time for Europe, changing the Prime Minister at this point might not be the sensible thing to do.”

Good Morning Britain viewers jumped on board the debate, with many divided over whether Boris should stay or go.

One thing they were united on, though, was that Britain isn’t “at war”.

“Adil Ray we are not in a war. We are supplying a country in a war. We have supplied Saudi Arabia for years who are in a war but we still changed leaders,” said one viewer.

Another said: “We are NOT at war with Ukraine.. Ukraine is at war with Russia. Get it right Adil!!!”

Another added: “We are not at war! Historically we changed PMs during times of war.”

“We, the UK, are not at war with Russia,” another concluded.

So what did you think of the comments? Tell us on our Facebook page @EntertainmentDailyFix.