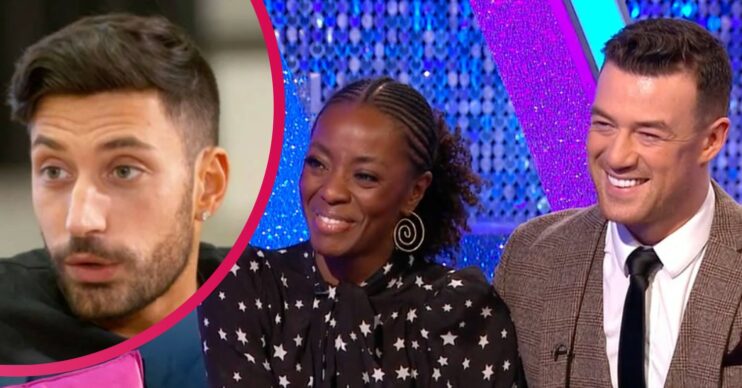 The other finalists are just as gutted as AJ and Kai

Giovanni’s kind words come after it was confirmed that AJ and Kai would miss the Strictly Come Dancing final due to AJ’s injury.

What has happened to AJ Odudu?

On Wednesday (December 15), AJ confirmed that she had managed to pick up an ankle ligament injury. In an interview with BBC Radio 1’s Newsbeat, the 33-year-old revealed that she was on crutches.

“Entering the final week, I literally am on crutches at the worst possible time. But I’m trying to power through,” she said.

Later that day, during an appearance alongside Kai Widdrington on It Takes Two, AJ got emotional as she went into more detail about her injury.

Read more: Strictly fans demand AJ Odudu and Kai Widdrington to be bought back next year

“I’m upset because I’ve suffered an injury, don’t know when it happened, but essentially, I’ve got issues with my joints,” she said. AJ went on to confess that she couldn’t stand up without her crutches.

However, even then, AJ remained hopeful that she would be in the Strictly final.

When did AJ Odudu and Kai Widdrington announce their exit from the show?

However, today (Friday, December 17), it was confirmed that AJ Odudu and Kai Widdrington had withdrawn from the show. Their devastating news comes just a day before the final.

After consulting with medical professionals, it was decided that she and Kai wouldn’t be able to compete in tomorrow’s final.

In a statement, AJ Odudu said: “I’m deeply upset that I am unable to perform in the Final due to a torn ligament in my right ankle.”

The star then went on to say that it had been an “incredible honour” to learn to dance over the last 13 weeks.

“To do it alongside someone as special, patient, and devoted as Kai is something I’ll treasure forever,” she added.

“I’ve been absolutely honoured to get to dance with the incredible AJ Odudu for the last few months and although neither of us wanted our journey to end this way, AJ’s health and safety are by far the most important things,” he said.

The pro dancer then went on to thank AJ for being the “absolute best partner” he could have asked for.

Both AJ Odudu and Kai Widdrington ended their statements by wishing their fellow contestants luck in the final.

What did Giovanni say to Kai Widdrington and AJ?

Plenty of people flooded the dancing duo’s Instagram comment sections with their well-wishes, with many saying they were “heartbroken” for the pair.

Fellow finalist, Giovanni Pernice, who is paired up with Rose Ayling-Ellis, shared his support on Kai’s Instagram.

“Sorry my brother… sending you my love!!” he wrote. “You both should be proud of what you have created this year on the dance floor… pure magic every single week!”

Read more: Strictly fans call for Rhys and Nancy to be reinstated or final won’t be a ‘real’ competition

“Absolutely devastated for you both,” Giovanni’s partner, Rose, said. “You should be so proud of all the work you done. It is beautiful. I’m sending lots of love to you both.”

With AJ and Kai out of the competition, many viewers are calling for Rhys Stephenson and Nancy Xu to be reinstated.

You can catch the Strictly final at 7pm tomorrow (Saturday, December 18) on BBC One and BBC iPlayer.

What do you think of Giovanni’s message to AJ Odudu and Kai Widdrington? Leave us a comment on our Facebook page @EntertainmentDailyFix and let us know.