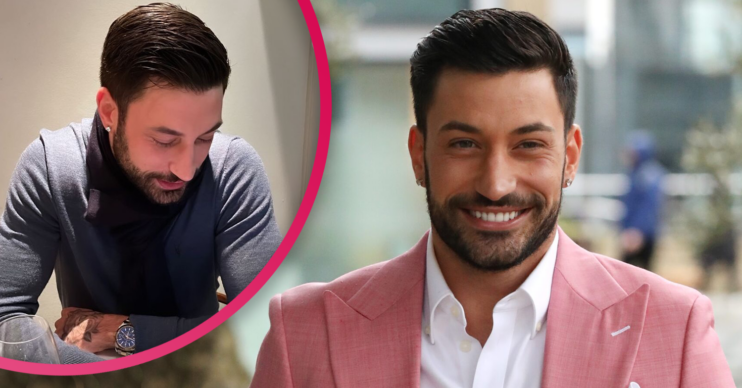 Deserved? We think so!

Giovanni was out on the town with 2020 Strictly star Jamie Laing – and the lovely Gio quickly became the butt of Jamie’s joke.

What happened when Strictly Come Dancing stars Jamie and Giovanni had dinner?

Giovanni posted a video of Jamie to his Instagram Stories last night.

In the video, Jamie can be seen claiming that Giovanni asked him to take a picture of him posing at the dinner table.

Giovanni insists he didn’t, but Jamie had the last laugh.

Over on Giovanni’s socials the dancer was heard giggling as Jamie said: “You told me to take a photo of you.”

“No I didn’t actually,” Giovanni laughed.

“No I didn’t,” a giggling Giovanni insisted.

“Do you want me to airdrop it to you?” Jamie joked.

“No you didn’t,” Giovanni laughed before the video ended.

So did Jamie take a picture?

A little look on his Instagram Stories reveals the picture that Giovanni posed for.

He is seen looking down at his phone, smiling slightly, in a particularly brooding fashion.

Jamie captioned the snap: “The ballet dancer is here.”

When did Jamie appear on Strictly Come Dancing?

Jamie first appeared on the show in 2019.

However, he didn’t get very far, having to pull out before the live shows due to an injury.

For the first time ever, he was allowed to return to the show in 2020.

He made it to the final with partner Karen Hauer, finishing as runner up.

As fans of the BBC dance show will know, Giovanni went one better than his pal this year.

He lifted the show’s coveted Glitter Ball trophy after being crowed winner of the show alongside his celebrity partner, EastEnders actress Rose Ayling-Ellis.