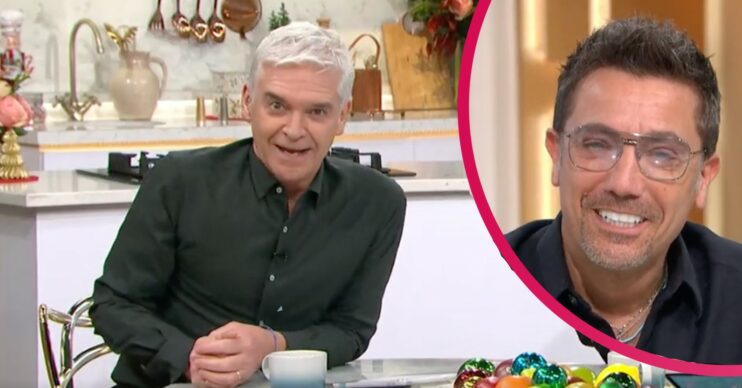 Gino, 45, has been a regular fixture on This Morning since 2009 and has previously dropped innuendos and cheeky comments on air in the past.

Gino was appearing alongside hosts Phillip Schofield and Josie Gibson, who was standing in for Holly Willoughby.

They were discussing a sausage in batter dish that Gino had made.

What did Gino D’Acampo say about a sausage?

“You sell it as a sausage in a hole,” Gino told Phillip and Josie, who were laughing already.

Josie was almost in tears laughing as Gino hit back.

“No, there is a hole. I’ll show you the hole later,” he said, prompting even more laughter from Josie and Philip.

What was Phillip Schofield’s reaction?

“All right then,” Phillip laughed as Gino repeated that he’d show the host the ‘hole’ later.

Fans of This Morning were in stitches at Gino’s innuendos and quickly took to Twitter to rave about it.

“You need Gino on there all the time. He is brilliant,” one viewer wrote.

Another This Morning fan wrote: “Omg I totally enjoyed watching Gino… what an absolute treat. I think he should have his own slot on the show… Love you, Gino.”

“[Gino] is literally my favourite human! He’s funny, good looking & a great chef… he might just be the almost ‘perfect’ man,” a third This Morning viewer swooned.

How did Gino make his name?

Gino D’Acampo, from Naples, Italy, rose to fame on ITV’s This Morning when he began regularly appearing on the show in 2009. He then went on to find even more fame as a regular fixture on Celebrity Juice and even took part in I’m a Celebrity.

This isn’t the first time he’s dropped dirty innuendos on This Morning, as he regularly has hosts Holly and Phillip in stitches with his comments. It’s probably safe to say that it won’t be the last time either!

Holly was replaced by Josie Gibson, 36, in today’s show, as she was out with illness.

What did you think of Gino’s innuendos? Head to our Facebook page @EntertainmentDailyFix and tell us what you think