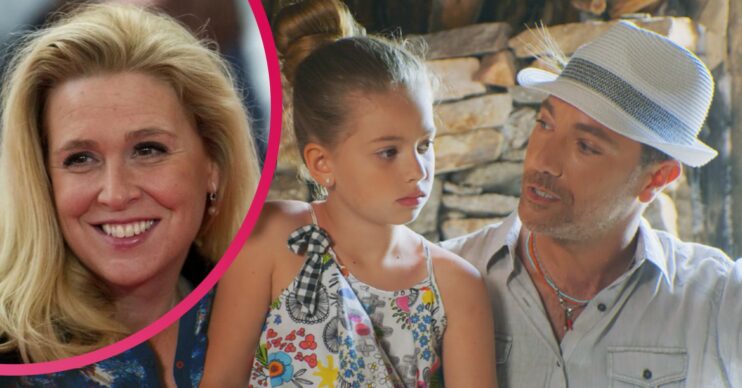 The couple split for a year but got back together

Gino D’Acampo travels Italy with his family in ITV1’s new series Gino’s Italian Family Adventure – but who is his wife?

And his wife very rarely appears with him on TV.

Here’s everything you need to know about his wife and their three children.

Who is Gino D’Acampo’s wife?

The couple met while he was working in Sylvester Stallone’s Mambo King restaurant in Marbella.

He was just 18-years-old at the time and she was his first love.

But their relationship hasn’t all been plain sailing.

In fact, they broke up for a year before getting hitched – but the time apart confirmed to Gino that Jessica was The One.

After getting back together, the couple decided to move to the UK.

Do Gino D’Acampo and his wife have kids?

Yes, Gino and wife Jessica have three children together.

The couple are proud parents to Luciano, 19, Rocco, 16, and nine-year-old Mia.

Although the celebrity chef is very private when it comes to his family, he has previously opened up about his parenting skills.

During an interview with Woman magazine, he admitted that he is the stricter parent.

“You can see my wife look at the children, saying with her eyes ‘Don’t even think about it, he’s not going to bend’,” he said.

“My kids are not allowed to be fussy eaters. The problem with fussy children is their stupid parents.

“I run a family kitchen and in my house we don’t have options. I never had options, why should they?”

The rumours are true – Luciano and Gordon’s daughter Tilly did date.

Although, they aren’t together now.

Gino revealed he found out about the relationship while working with Gordon on the 2019 series of Gordon, Gino & Fred: American Road Trip.

“I FaceTime my son Luciano during the trip and he was in a restaurant and he was saying ‘Hi’ to Gordon and all of a sudden, Tilly appears,” he revealed.

“Look, I don’t care, it’s nothing to do with me, but Gordon cares, of course.

“Because if something happens serious then Matilda will be called Matilda D’Acampo! Gordon hates that. Can you imagine it?”

Gino explores the roots of his passion for food in his native country, accompanied by wife Jess and their three kids.

He says the series has been on his radar for a couple of years.

“I’ve done some [camera] work with my daughter Mia and she was very good,” he said.

“I done something before with Luciano so I knew he’d be alright. Rocco I was sure about it.

“The one I wasn’t sure about was Jessica, my wife, because she doesn’t really like to get involved in it.

“But the lockdown sort of helped, because we were all very eager to do something different.

“So that was the right timing.