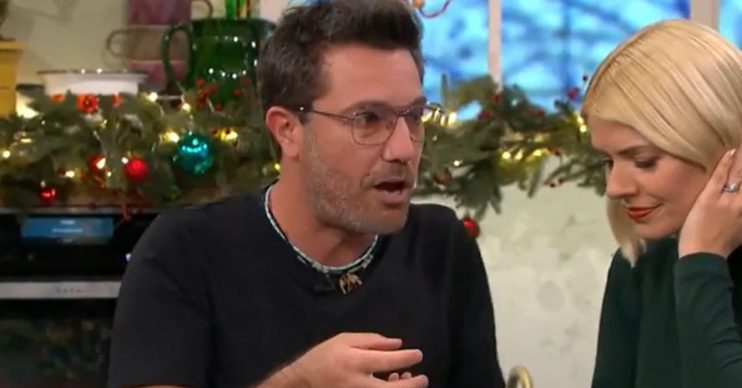 He couldn't quite get it right

Gino D’Acampo had This Morning viewers in hysterics when he struggled to pronounce a word and accidentally dropped a series of X-rated expletives.

The Italian chef, 43, was hosting a cookery segment with presenters Phillip Schofield and Holly Willoughby when he made the blunder.

They were talking about truffles when Gino explained that not many people like them due to their smell, which Holly said she doesn’t mind.

He insisted that if you open a jar of truffles and give it one big sniff, you might change your mind as the aromas hit your nostrils.

Gino explained on the programme, as he prepared to open a jar for Holly to have a whiff: “For people at home, [if] you don’t like it, do this experiment.

“I’m going to open and what I want you to do is to just analate it. Analate it as much as you can.

But Phil and Holly interrupted to correct him: “Inhale!”

Gino, confused, asked: “What did I say?”

Viewers at home reacted to the moment on Twitter.

You mean ‘inhale it’ Gino!

A third said: “‘The more you analate’ Um… Gino #ThisMorning.”

Read more: Phillip Schofield scolds Gino D’Acampo as he interrupts his cooking segment on This Morning

Over the last few months, the Celebrity Juice star had featured on the programme wearing a bandanna around his head.

But viewers who hated it flocked to social media after each appearance to beg him to ditch the look, which many put down to a midlife crisis.