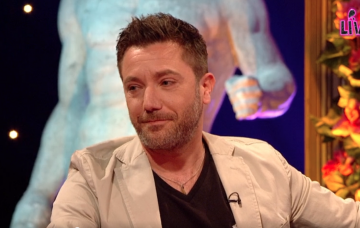 He has an even dirtier mouth than Keith Lemon, it seems

The nineteenth series of Celebrity Juice kicked off in typically outrageous fashion – but it was celebrity chef Gino D’Acampo who proved the most rebellious figure in an episode which also featured Russell Brand on the panel.

This Morning regular Gino turned the live show TV airwaves blue as he dropped THREE C-bombs in short order, despite the guests being warned by presenter Keith Lemon at the start of the show that swearing was banned.

Moments later, however, Gino decided to escalate the sweary situation with some extreme profanity when asked if he understood what kind of language was acceptable for broadcast.

Playing the innocent and laying the blame at his Italian accent for emphasising certain syllables, Gino asked: “Contagious… Can I say contagious?”

As Keith flapped and pretended to be offended, Gino pushed on and switched to singing obscenities.

Bursting into song, he continued: “Can I say: ‘Can’t Buy Me Love’?”

“You can’t sing it but you can’t say it,” Keith fired back.

As Gino’s team captain Holly Willoughby and panel partner Toff from Made In Chelsea giggled away, Russell pointed out the performance rights for Gino’s ditty could land the show in more trouble than if he’d barked the ‘C’ word anyway.

“That is probably more expensive to use a Beatle’s lyric that hasn’t been cleared than say that word,” he said.

Is their anything gino can say that doesn’t sound dirty, rude 😂😂#celebrityjuice

… But not every viewer was amused.

That’s me done with #celebrityjuice Series after series Gino gets less and less funny… most of the time is cringeworthy to watch. Shame 😔

Celebrity Juice is on ITV2 on Thursdays at 10pm.