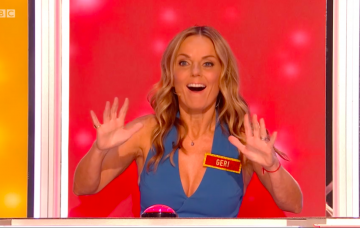 The Spice Girl forgot to press the button

She has ONE job on BBC talent show All Together Now – press a buzzer if she likes a performance – but Geri Horner admitted she’d forgotten to do it during Saturday night’s show.

Contestant Lucy – who admitted before her performance: “I’ve never had a lot of confidence,” adding: “I’m petrified” – got 81 buzzers out of 100 during her amazing rendition.

Mum-of-two, Geri was seen standing up and reaching for her buzzer as Lucy sang her final note. When nothing happened, she covered her mouth, looking shocked and could be heard saying: “I was too late!”

The nineties icon looked embarrassed as she told the Adele tribute artist: “Oh, I have to… Lucy, I pressed the button too late. I put my hands up.”

She then complimented the 33-year-old singer, saying: “I don’t normally like rock but actually you just proved that regardless of the song genre, if you do it right, you do it true, you get everyone involved.”

Viewers watching from home weren’t too impressed by the mistake, with one tweeting: “Is this actually on TV? That barrel must have a big hole in the bottom of it.” A second complained: “Joke of a programme.”

“#AllTogetherNow second act and Geri has forgotten the rules of the show already. Press the damn button!” added a third.

A fourth said: “She had one thing to do. Useless.”

Some moaned generally about the singer’s appearance on the show, tweeting: “Geri Horner obviously didn’t get the ‘with age comes maturity’ memo. Is all that childish screaming, giggling and jumping up and down really necessary? #AllTogetherNow.”

A second wrote: “@alltogethernow love the show it’s just @GeriHalliwell that ruins it for me! She’s just really annoying!”

Others were more generous, praising the show. One wrote: “Brilliant 1st episode of #AllTogetherNow last night If you missed it you can catch up on @BBCiPlayer.”

A second commented: “#AllTogetherNow is such a clever format – it’s democratic and inclusive. I love that it shows off the variety all around the music industry onstage with the performers and offstage with the 100. And without the need for grandstanding judges or questionable phone votes. I’m a fan.”

Contestant Lucy took to social media to defend Geri, tweeting: “Loved it!!!!! Had such an amazing time! Amazing support and don’t worry @GeriHalliwell I forgive your blunder! 😂.”

All Together Now airs Saturdays on BBC One, and you can catch up on episodes on iPlayer.

What did you think of Geri’s mistake? Leave us a comment on our Facebook page @EntertainmentDailyFix and let us know what you think.