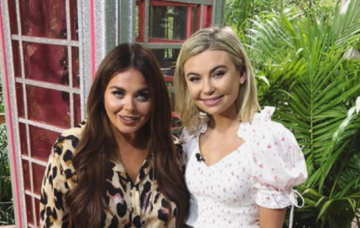 It was reported yesterday the pair had fallen out

It appears Georgia Toffolo is still bearing a grudge against Scarlett Moffatt after it was reported the former I’m A Celebrity… Get Me Out Of Here jungle queens had been feuding, with Georgia joking on the red carpet that she would talk about “anything but that”.

The 24-year-old hit the red carpet at The Sun’s Military Awards in London last night, but appeared to confirm the feud by refusing to be drawn on the former Gogglebox star.

She said: “I got back from the jungle on Friday. I did Extra Camp. I’d rather not talk about [Scarlett] this evening. Anything else but not that.”

The former Made In Chelsea star reportedly told friends she was made to feel unwelcome and victimised by Scarlett, 28, when she was filming for the spin-off show I’m A Celebrity… Extra Camp earlier this month.

A source told The Sun: “She flew out to Australia for Extra Camp but she was upset while she was there because of Scarlett’s attitude towards her.

“There were major issues on set and there’s a lot of bad blood between them.

“Toff doesn’t know what sparked it, but she was made to feel very unwelcome and upset by the way Scarlett treated her.”

However a source close to Scarlett denied the claims saying: “She loves Toff and they have never had a falling out. For someone herself who was bullied at school this is very upsetting.”

Fans were upset when, as winner of the previous series, Toff was not at the final to hand over the crown to new King of the Jungle Harry Redknapp. Instead Scarlett stepped in to do the coronation on the series final.

Earlier this month Toff was accused of duping her fans by hiring a social media agency to write her “witty” tweets. Social Alchemist were hired to post on her behalf to help her boost her following online. The company boasted on LinkedIn: “We were tasked with making sure that Georgia Toffolo dominated the I’m A celeb conversation online.”

Toff’s spokesperson insisted she has ultimate say over what is posted.

Who do you want to see heading into the jungle next year? Leave us a comment on our Facebook page @EntertainmentDailyFix and let us know what you think!