Soap actress responds to 'fake' story about her soap departure

Georgia May Foote has denied the suggestion she turned down a Coronation Street storyline which would have seen her soap character convert to Islam.

According to The Sun, former Corrie star Marc Anwar has claimed Georgia, 27, left the soap after rejecting plans for character Katy Armstrong to fall in love with his onscreen grandson Zeedan Nazir.

Anwar also claimed the plot would progress to see Katy asked to convert and become a Muslim herself.

Read more: Georgia May Foote undergoes major transformation in the name of charity

He told The Sun On Sunday: “When that was put to her she declined. I don’t know what her reasons were.

“But she was adamant she didn’t want to do that storyline. And so the response was: ‘OK, see you later.'”

Anwar, 62 – who left the soap after three years in 2016 – went on to claim Georgia was left languishing as a bit part player as her contract wound down.

But this morning Georgia blasted the account as being a ‘fake [bleep] story’.

She told her 333,000 followers she would have “jumped at the chance” to be part of any such storyline, adding the claims had nothing to do with her 2015 exit after five years as a regular cast member. 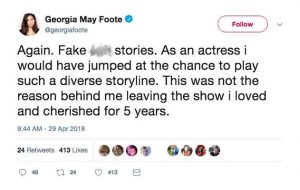 A Coronation Street spokesperson also denied the claims, telling Entertainment Daily!: “Georgia never refused to do any storyline during her time in the show.”

Georgia – who went on to come second in Strictly Come Dancing just months after leaving Corrie – praised her experience on the soap during her last months on the show.

“I have had some fantastic storylines and worked with some wonderful actors,” she said at the time.

And although Katy was not initially killed off, the chances of a Weatherfield comeback for Georgia ended last October, as the mum of Chesney’s son Joseph died offscreen in a car crash in Portugal… despite fan predictions Katy could return from the dead.

Outraged viewers were quick to send Georgia their best wishes on Twitter.

Knew it was fake!! Clearly just trying to cause trouble!!! 🙁

Ignore it lovely you don’t need to justify yourself to anyone !! You do what makes you happy and concentrate on your development and family xx