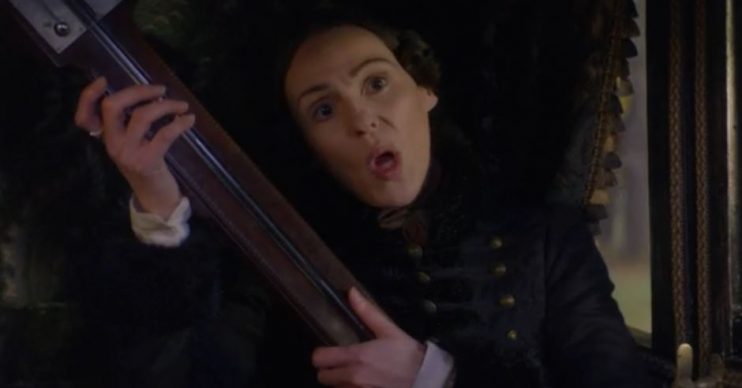 BBC One drama Gentleman Jack had viewers in stitches last night (June 30) with a bizarre yet hilarious spat involving an oversized thermometer.

In the show’s penultimate episode, Anne’s former lover Mariana stayed with her while her husband, Charles Lawton, left for his nephew’s funeral.

Mariana travelled with Anne by coach as she journeyed to Oxford and on to London, and the two of them bickered about Mariana’s future living arrangement in the event of her husband’s death.

As they rowed, Mariana stopped what she was saying and demanded of Anne: “Why did you bring that?”

Anne, holding a massive thermometer, replied: “So I know what the temperature is! Why else? You need to shut up now, you’re bringing back some very poor memories.”

But Anne furiously cut her off, snapping: “Yes! I’m a bit odd. I like to have my thermometer with me on holiday. It’s not illegal.”

I hope that massive thermometer is registering the icy coolness of this whole conversation. #GentlemanJack pic.twitter.com/O8wSmnXz5Q

One said: “Omg this scene with the thermometer 😂😂😂😂😂 dying #GentlemanJack.”

A third tweeted: “#GentlemanJack the thermometer argument is by far my favourite scene so far 😂.”

Someone else said: “This series and cast are superb in every way. The little row about the thermometer did make me chuckle. #GentlemanJack.”

A fifth wrote: “So I spent like 20 minutes laughing at ‘I’ve got my thermometer with me. It’s not illegal’ Suranne Jones was made for this fkn role.”

“I like to have my thermometer with me on holiday! 🤦🏻‍♀️😂😂 #GentlemanJack,” tweeted a sixth.

This series and cast are superb in every way. The little row about the thermometer did make me chuckle. #GentlemanJack

So I spent like 20 minutes laughing at “I’ve got my thermometer with me. It’s not illegal”
Suranne Jones was made for this fkn role #GentlemanJack #RepresentatioMatters
(#WynonnaEarp #FightForWynonna)

The first episode of Gentleman Jack, aired in May, was the most successful launch for a new BBC drama so far this year.

Creator Sally Wainwright, speaking about the renewal of the show, said: “It’s so exciting that so many people have had such a positive response to Suranne’s exuberant performance as the brilliant, life-affirming Anne Lister and to Sophie’s beautiful performance as her courageous partner, Ann Walker.

“I’m utterly delighted that we’ve been recommissioned, because there are so many more big, bold stories to tell about Anne Lister and Ann Walker.

“A massive thank you to the BBC and HBO and to everyone at Lookout Point.”