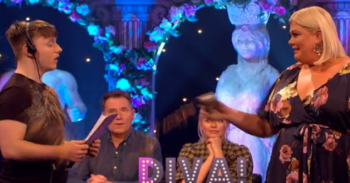 She was trying to prove what a diva she is

Gemma Collins has lived up to her diva label after her shenanigans on Celebrity Juice.

The TOWIE star made sure she showed who is boss during a game on the ITV2 show – but no one could have expected what she did!

The 38-year-old went head to head with Ru Paul’s Drag Race star Michelle Visage, to see who could be the biggest diva and win a point for their team.

However, Gem truly brought out her inner GC and took the diva antics to the next level by throwing a drink in the face of a crew member!

Host Keith Lemon began the game by telling Gemma: “One of our runners has brought you a cup of tea, but it’s not the tea you’re accustomed to. How do you react?”

A young crew member then came running on with a cup of coffee for Gemma. But he probably didn’t realise what he had let himself in for…

GC took if from him and said: “You’re supposed to call me Queen,” before proceeding to chuck the entire contents of the cup over him!

The entire audience gasped, as did Keith and the celebrity guests.

The runner was left soaked in coffee!

Gemma later joked on Instagram: “When it comes to being a #Diva there was only ever going to be one winner! 🤣
“Tune into @itv2 Tonight 10pm for an hilarious episode of @celebjuiceofficial We had such a laugh! X”

When it comes to being a #Diva there was only ever going to be one winner! 🤣 Tune into @itv2 Tonight 10pm for an hilarious episode of @celebjuiceofficial We had such a laugh! X

She promised people they are in for some hilarious viewing, as the couple team up for a game of “Master and Miss” and put their relationship to the test.

Cue GC telling the nation that Arg once pooed in her bed.

We can’t wait to watch!

What do you think of Gemma’s diva move? Head over to our Facebook page @EntertainmentDailyFix and let us know.