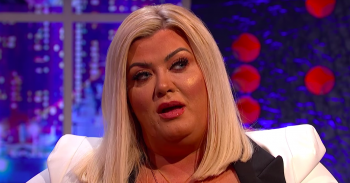 Gemma Collins sick ahead of Dancing On Ice final: “I’ve got a virus”

Her time on Dancing On Ice was punctuated with injuries, sickness and controversial diva headlines.

And now Gemma Collins’ epic return for tonight’s final has been called into question, after a virus struck her down and she admitted: “I feel absolutely terrible.”

Taking to Instagram Stories on Saturday, the TOWIE star shared videos from rehearsals, saying: “I’m back at Dancing On Ice… I will be coming out centre stage one last time, hell to the yeah.”

But she then added: “Guys, excuse me, I look so bad today. I’ve got that virus that’s going round. I feel absolutely terrible.”

The 38-year-old seemed determined to battle through the germs, adding: “But I’m not letting down anyone who spent their £1.50 to vote for me.”

She also hinted what her performance would include, chatting to two men who would be skating with her, holding giant feathers.

Gemma added to fears as she later left rehearsals wearing her dressing gown, and checked into a spa overnight.

But things seemed positive on Sunday morning, when The GC shared a video of one of her DOI routines, dancing alongside pro skater Matt Evers.

Wishing her co-stars luck, she captioned it: “I will be putting my skates on one last time today …. ✌🏻 but I want to wish the amazing finalists @wes.nelson 💋@jamesjordan 💋 @saaraaalto 💋the very best of luck you ABSOLUTELY DESERVE to be where you are ✌🏻. It’s been a great series ✌🏻.”

It followed her Saturday night appearance on The Jonathan Ross Show, where she discussed her much-debated return for the final.

Gemma spoke about her feud with DOI judge Jason Gardiner, explaining how his comments calling her a “refrigerator” nearly made her cancel her appearance.

She told Jonathan: “Do you know what, I did pull out and then I thought, for everyone that has supported me, and for my own self esteem, I am not going to back down to anybody. I am going to walk back on that show on Sunday night and I am going to skate like it’s the last day of my life.”

Fans are hoping the illness and the arguments won’t stop the TV star from returning, with one commenting: “You’ve been the real star of this show for me. Proving people wrong and standing up for yourself amongst preconceived ideas about you and bullying too @gemmacollins1. Your determination is an inspiration xx.”

A second said: “Sooo pleased you’ll be there @gemmacollins1 👏👏👏 not letting snide, nasty comments get to you 😉.” A third wrote: “You go girl and show them what you’re made of xx.” One more added: “A true star, enjoy it Gemma. Have fun. Loved you on JR last night. X.”

Let’s hope that virus clears up and nothing stops Gemma appearing in tonight’s finale. We can’t wait.

Will you be watching Dancing On Ice? Leave us a comment on our Facebook page @EntertainmentDailyFix and let us know what you think.