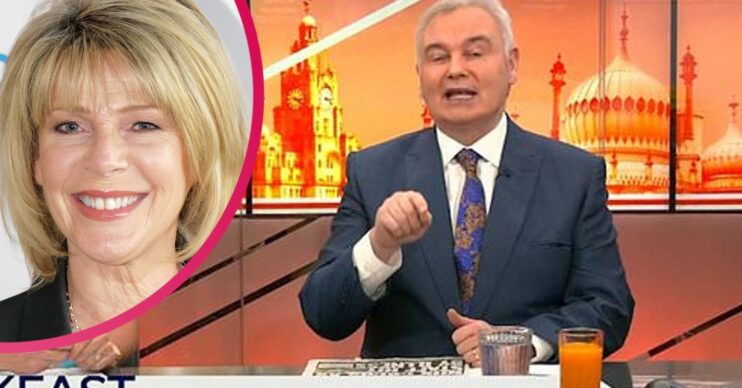 The TV star made his debut on Monday alongside presenter Isabel Webster for the channel’s new breakfast show.

During his big first day, Eamonn confessed to viewers that he enjoys using delivery services such as Deliveroo.

He says he uses them often when Ruth asks him to pop to the shop for some essentials.

Isabel replied: “You know you pay through the roof for that? They ramp up the charge.”

Eamon then added: “She also objects to me buying any food in garage shops.”

Ruth, who was watching from home, decided that she wanted to call her husband out.

“You don’t do the shopping on Deliveroo, you just get treats for you,” she messaged him.

Isabel then warned Eamonn: “You can’t get away with saying that, she’s watching!”

Meanwhile, Eamonn vowed to “do things differently” during his opening speech on the show.

He told viewers at home: “I’m having some lovely messages from people all around the country who are looking forward to whatever we’re going to do differently.

“Hopefully we are going to do lots of things differently.

Did you watch Eamonn Holmes on GB News? Leave us a comment on our Facebook page @EntertainmentDailyFix and let us know what you think of this story.