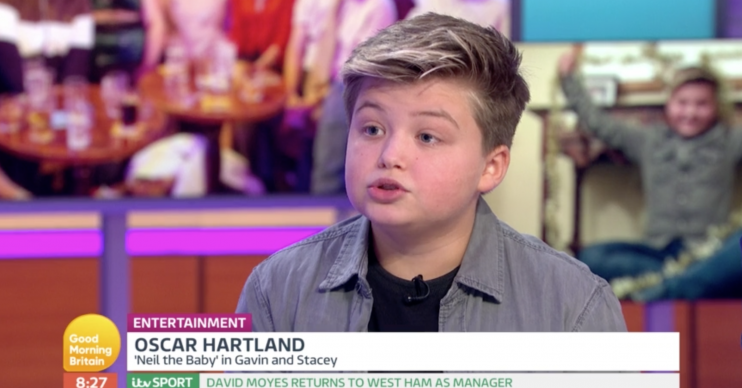 If the people want it, Neil The Baby says James will write it!

One of the stars of Gavin & Stacey has revealed that the show’s creator James Corden will make a fourth series if it’s what the viewers want.

The BBC favourite returned to our screens on Christmas Day after a ten-year absence and culminated in Ruth Jones’s character Nessa proposing to Corden’s Smithy.

Now the pair’s screen son Neil The Baby, reprised by 10-year-old Oscar Hartland, has revealed all about a potential fourth series.

Speaking on Good Morning Britain, Oscar revealed he quizzed James about the chances of a full series during the filming of the Christmas special.

Read more: The hardest-working member of the royal family revealed

He said: “I did ask James in the process of filming. He said it’s just what the people want.”

Oscar added: “Me, I would love it to happen. It really depends what other people think about it and whether they like it or not.”

The child star, who isn’t a trained actor, said he was thrilled when he landed the role.

And, he revealed, despite starring in the series as a baby, he wasn’t a shoo in for the role.

Read more: Katie Price “banned” from taking her kids on New Year holiday by their dads

“I didn’t really get my hopes up as there were other people who did acting. I did my audition in Cardiff. A few weeks later I found out I got the job. It was really cool,” he said.

I would love it to happen. It really depends what other people think about it and whether they like it or not.

Oscar revealed he watched the Christmas special at home with his family, with his mum dressing up a Nessa for the occasion.

And, he admitted, the ending was not only a surprise to the 11.6m viewers, but to him as well.

“I didn’t know about that,” he said. “I was so excited at the time. I thought there has to be a season four and maybe a special.”

Larry Lamb, who plays Mick Shipman, however, would like the show to appear on the big screen.

He recently revealed: “To me I always think the logical thing to do would be to make a film of it.”

Ruth Jones, too, has hinted at more episodes of the show, admitting she’d “never say never” to writing more episodes.