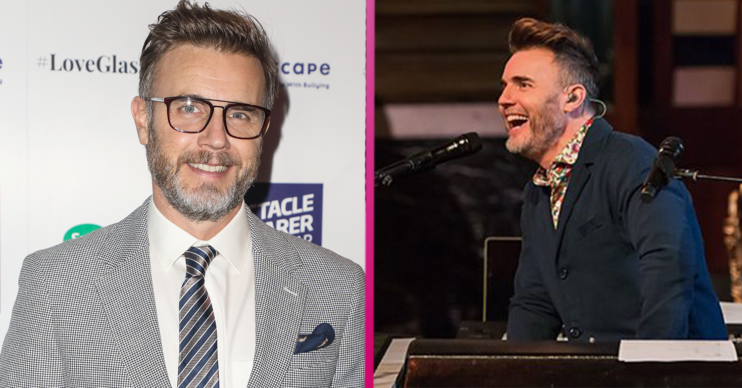 Gary Barlow I’m With the Band: What’s the new show about and will Take That appear?

Gary Barlow: I’m With the Band airs on BBC One tonight (June 4) and will see Gary bring together a supergroup of musicians to perform live (June 4).

From teen heart-throb in the ultimate ’90s boyband Take That (sorry Boyzone!) to his turn as an X Factor judge from 2011-2013, Gary has been a household name for decades.

But how much do you know about the Mancunian crooner?

Gary Barlow and his wife Dawn celebrated their 21st wedding anniversary in January.

The couple met when Dawn was working as a back up dancer on Take That’s 1995 Nobody Else tour.

Gary still managed to perform at the opening ceremony of the Olympic Games in London despite losing his daughter just one week previously.

After Robbie left Take That, he and Gary Barlow were in a feud that lasted over a decade.

Robbie Williams later admitted he had been partying hard when his bandmates told him it was time to leave.

Robbie has opened up about his struggle with alcoholism and has been sober since 2000.

After Take That broke up in 1996, Gary faced his own demons, struggling with binge eating and bulimia.

However, he got back on track by the time Take That reunited without Robbie in 2006.

Gary and Robbie finally met in 2008 and decided to put the past behind them.

In their 2010 single, Shame, the pair address their feud. In that same year, Robbie joined Take That to record the album Progress.

What is Gary’s net worth?

Gary, who turned 50 this year, has a net worth of £90 million according to the Sunday Times Rich List. He took 37th place on the list of Music Millionaires in 2021.

In addition to his success with Take That, Gary has penned 13 number one singles as well as bagging three number ones as a solo artist.

What’s next for Gary Barlow and Take That?

Now a trio, last year Gary confirmed that a Take That film would begin shooting in summer 2021.

Speaking to The One Show, Gary said the film would be released in 2022. We can’t wait to hear more!

Thanks @GaryBarlow for inviting me on your new show @IwtBand 🙏🏾❤️🎶 Such a great vibe & amazing Artist’s🏆💫 Tune into BBC One from 10:45pm tonight ✨ pic.twitter.com/G9BwgTv7Yf

Gary Barlow: I’m With the Band – what’s it about?

Gary’s supergroup will feature on the BBC show tonight.

It includes pianist Jamie Cullum, guitarist and singer James Bay and McFly’s Tom Fletcher, whose wife Giovanna Fletcher was crowned queen of the jungle in I’m a Celebrity 2020.

He will also be joined by pop stars Anne-Marie and Craig David for a special performance and to talk about their careers and musical heroes.

However, it’s not thought his Take That pals will appear on the show tonight.