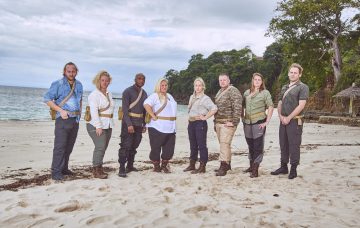 The Island With Bear Grylls has been plunged into yet another “fix” row after viewers accused the show of “planting” food and a huge fishing net.

They cried foul when three guinea fowl just happened to wander near camp, and even suspected the birds had been “drugged” so that art dealer Barnes could easily capture and slaughter them.

The “poor” campmates, meanwhile, stumbled upon an enormous, fully intact, “conveniently placed” net on the shoreline and used it to catch a fish for dinner.

Last night’s episode saw the starving Channel 4 islanders resorting to desperate measures to find something to eat, including a disastrous raft voyage, and ended up having to be rescued by the show’s emergency team when the flimsy vessel sank.

It had been several days since any of the islanders had eaten meat or had a decent meal, and malnutrition was kicking in.

So the food and fishing equipment were a lucky break for the campmates — too lucky, in the opinion of many viewers who vented their fury on Twitter.

Why are people shocked these animals just appear, ‘suspiciously’. Nothing suspicious, they bloody put them there!#TheIsland

#TheIsland should be renamed The Fairytale due to the utterly impossibly coincidental appearances of fishing nets & impossibly tame guinea fowl & other animals etc just as the hapless islanders are on the brink of starvation..every, single, time

In next weeks episode, the islanders “discover” a fully equipped fishing boat, that’s somehow washed ashore when the tide was out!#TheIsland pic.twitter.com/Hnyjy1cbNh

That bird practically shouted ‘come get me!’ Reckon the animals are planted … or drugged #theisland pic.twitter.com/dGHuk7vST9

Barnes’s team were foraging near their camp when they heard the call of the guinea fowl.

They swung into action, caught the animals and wrung their necks, before cooking them for dinner.

It was fortuitous timing as Mercedes had spent much of the episode vomiting and sleeping through exhaustion. She decided to quit the island at the end of the show.

* The Island With Bear Grylls continues on Channel 4 at 9pm next Monday.

Do you think the islanders found the birds and net by chance? Leave us a comment on our Facebook page @EntertainmentDailyFix and let us know what you think!