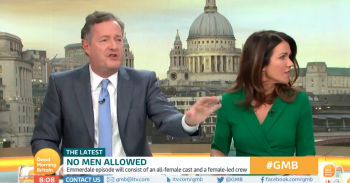 Piers Morgan believes Emmerdale’s upcoming episode produced by and featuring only women is a ‘virtue-signalling’ stunt.

The presenter unleashed a furious tirade against the all-female instalment of the ITV soap to mark International Women’s Day on Good Morning Britain earlier today.

Piers, 53, ranted that “feminazis” would be up in arms if he was successful in campaigning for male-only shows.

He demanded: “Try and explain to me why this isn’t just a load of old virtue-signalling, PC-crazed poppycock.”

And although Dawn seemed to partially side with Piers’ take by noting she found the efforts “patronising”, Piers later took a cheap shot as he claimed a similar approach focusing on men would enrage activists.

He banged on: “Women need men as much as men need women.

“And the best Emmerdale is when you have – as we have now – storylines involving men and women, [and] great producers who are male and female.”

Read more: Emmerdale fans predict Chas will be the surrogate mum for Aaron and Robert

Adding he felt there would be uproar if Corrie was staffed entirely by a male cast and crew, he raged: “Feminazis would go berserk, you watch. You watch it – they’d erupt!”

Many viewers addressing comments to the programme’s Twitter account on the subject seemed to agree with Piers’ take.

“I blame the Spice Girls, me!” said one person.

“It is sexist against men,” claimed another.

This Friday, soap history will be made!

But is this approach really necessary for female empowerment? pic.twitter.com/QZ7PiN2p6F

A different viewer tweeted: “It’s supposed to be about equality, not women taking over.”

And a fourth added: “I think we’ve had enough of all this – yes women are equal and important and make a great contribution but let’s move on.”