But is it real or fake?

A Friends movie trailer has sent fans of the hit American TV show into meltdown as they ask two burning questions – could a movie version really be happening, and is Rachel’s hair still as perfect?

The clip has caused a tidal wave of excitement across the internet after popping up on YouTube, and shows Rachel, Monica, Phoebe, Chandler, Ross and Joey all grown up, as well as growing apart. 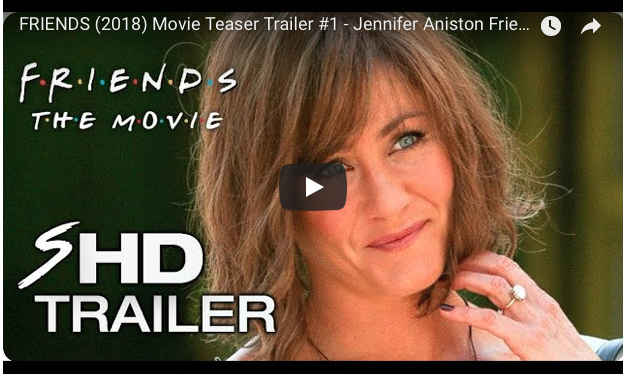 It’s been 14 years since the hit 90s show aired its finale, but with the popularity of the re-runs on Netflix fans old and new have been dying for more of the sitcom.

But sadly – tissues at the ready – fans’ dreams were shattered after eagle-eyed viewers spotted the trailer is in fact FAKE, leaving Friends followers heartbroken.

One confessed the news it wasn’t real had left them ’emotionally unavailable’.

The 2018 ‘Friends’ trailer was made and posted on YouTube by ‘Smasher’, who cleverly edited together scenes from the other shows the actors have starred in since Friends ended, like Joey and Cougar Town.

Not everyone fell for it though, saying things like: “I want to live in a world where everyone stops believing every single fake Friends Movie trailer that pops up on Facebook.”

The cast members themselves, who also include David Schwimmer and Matt le Blanc, have long insisted a Friends movie would NEVER happen.

Matthew Perry, who played Chandler Bing, told Variety: “When I’m asleep, I have this nightmare that we do Friends again and nobody cares.

“We do a whole series, we come back, and nobody cares about it. So if anybody asks me, I’m gonna say no. The thing is: We ended on such a high. We can’t beat it. Why would we go and do it again?”