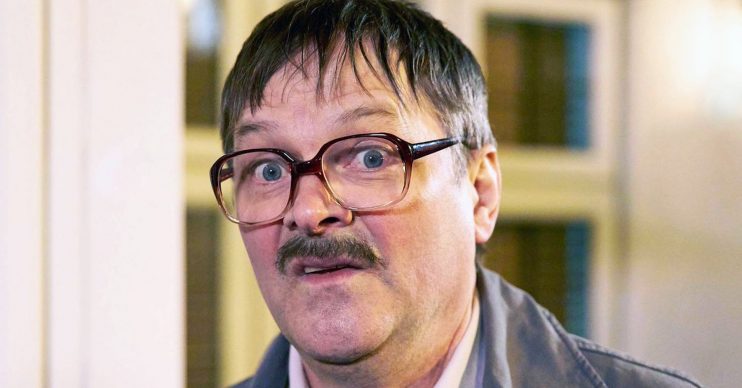 Channel 4 clearly have an excellent hair, make-up and wardrobe department

He turns up every Friday night uninvited, clearly has an unhealthy obsession with Jackie and he’s pretty damn offensive – albeit unintentionally.

In fact, the only good thing about him is his cute dog Wilson.

Fortunately, the actor that plays Jim, Mark Heap, is nothing like his Friday Night Dinner character to the point that they don’t even look alike.

Who is Mark Heap?

You should recognise Mark, but actually, you probably don’t.

The British star has been on the telly for decades and has featured in a number of iconic shows.

His first breakout role was as artist Brian Topp in Spaced, alongside Simon Pegg.

He played Malcolm in Benidorm, Peter Cole in The Trouble with Maggie Cole and Anthony in Miranda.

Opening up about how he became an actor, the star told ITV: “I just sort of always did it. I used to get little groups together and do silly sketchy things.

“I would like to be in any play that was going. Nobody ever ever said, ‘Oh, you could do this for a living.’

“I went to university and did plays, plays, plays. Then I joined a theatre company that wasn’t students.

“We got a grant from the local Manpower Services which meant an Equity card in those days. So I didn’t go back to university, got a job and suddenly thought, ‘Why don’t you just do this? You’ve been doing it all your bloody life.’

“I sort of slipped into it really. It’s a strange old thing. One thing has just led to another. I’ve been very fortunate.”

How can I watch Friday Night Dinner?

Friday Night Dinner is available to stream on All4.

Are you a Friday Night Dinner fan? Leave us a comment on our Facebook page @EntertainmentDailyFix and let us know what you think of this story.