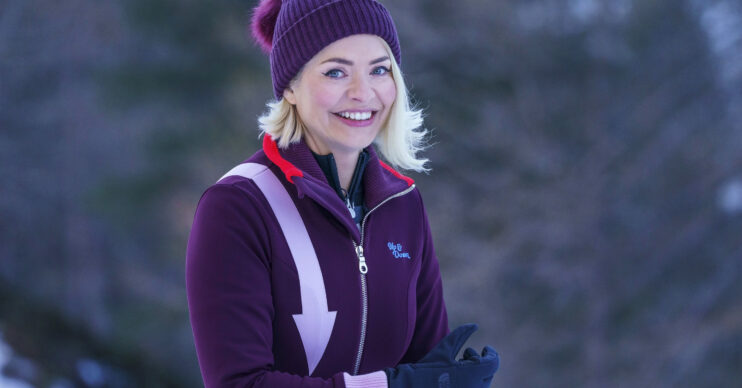 Can they overcome the cold?

Freeze the Fear with Wim Hof starts on BBC One tonight, testing a cast of eight brave celebrities with a series of astonishing challenges.

This Morning’s Holly Willoughby and comedian and Not Going Out star Lee Mack, present the show.

What is Freeze the Fear about?

Filmed over six weeks in the Italian Dolomite mountains, Freeze the Fear, literally puts the fear and the freezing into eight celebrities.

They have to undergo a series of high-octane, body-rocking, mind-blowing challenges which test them to their limit.

All in sub-zero temperatures.

And it’s under the watchful, thermometer-checking eye of Wim Hof.

He’s a weird Dutch man who is famous for his ability to withstand freezing water temperatures. And believes having a splash of cold is brilliant for the mind and body.

The show’s title was formally known as ‘Superstar Survival with Wim Hof’. Which pretty much says it all.

These are extreme conditions.

The insurance must be costly. Didn’t anyone learn a lesson from The Jump?

Meanwhile, the celebs all live together in a tented community. Bonding, comparing terrifying days – and possibly frostbite.

Lady Holly has swapped a nice wrap-around dress and the warmth of the This Morning studio sofa, for the thermal layers and below zero temperatures of the Italian Dolomites.

Comedian, leading man of Not Going Out and regular panellist on Would I Lie To You, Lee Mack might be a surprising choice as co-host on this show.

He’s certain to grumble a lot.

Who’s in the Freeze the Fear cast?

The much-loved former international gymnast has been a regular, well-regarded sports presenter and commentator for years.

Match of the Day, The Premier League Show, BBC Sports Personality of the Year.

You name the sport; she knows it.

The 48-year-old even got a MBE for her services.

Will the Logan go Shogun to win this competition?

The Welsh opera tenor, 48, has trod the West End theatre boards for years.

He was famously outstanding in Les Miserables playing Jean Valjean.

Though he came even more to the public notice courtesy of his personal and professional bromance with Michael Ball.

They love a singing collaboration. With a number of hit singles and albums to prove it.

Will he be singing while he’s winning in Arctic conditions? 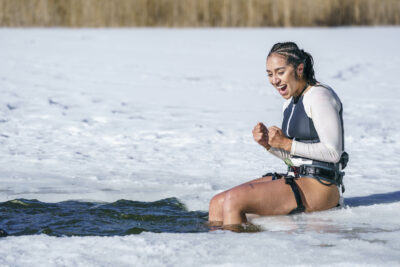 Chelcee Grimes is a woman of many talents.

29-year-old Chelcee has not only played professional football (Everton, Spurs, Fulham), but has also written songs for the likes of Kylie, Dua Lipa and Olly Murs.

And she now does a nice line in sports presenting and commentating, including Match Of The Day spin-off MOTDx.

Can Chelcee’s myriad of skills get her in and out of the cold?

Will she be tripping the light fantastic in Freeze The Fear, or plunging into dark waters?

Best known as a BBC weatherman, the Welsh pocket rocket showed his staying power in last November’s Children In Need.

Enthusiastic drummer, Owain, 38, did a 24-hour drumathon, raising over £3 million for the charity.

It was the most successful celebrity endurance competition in Children In Need’s history.

But can Owain prove his perseverance in sub zero temperatures? 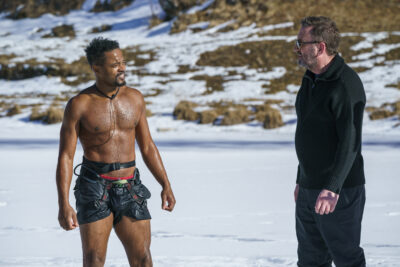 Patrice Evra, 40, was an international footballer – captaining Manchester United and his country, France.

As a super-fit member of the Freeze The Fear cast, can the sportsman demonstrate his determination in the Dolomites?

Rapper, campaigner and ex-husband of Made In Chelsea’s Milly, Professor Green (real name Stephen Manderson), has been an open, honest champion of mental health issues.

All because of his own past troubles.

But can he put mind over matter, or matter over mind taking the plunge in Freeze the Fear?

The 51-year-old actress went on to star in Red Cap, New Tricks and came fourth in last years The Masked Dancer, as Scarecrow.

She’s got a couple of kids with her ex, fellow actor, Tom Ellis (Lucifer).

But will she rise to the heat of the challenges, or fall at the first drop in temperature?

Who is Wim Hof?

Wim Hof might not be a household name here, but one look at his CV and you know that our celebrity contestants are in safe, if chilly, hands.

He’s known as ‘The Iceman’.

“There is a natural power in the cold. When we embrace it, magic happens.”

Tell that to the celebrities.

But they might be more in tune with the philosophy behind his extreme lifestyle.

Wim Hof lost his first wife – and mother of four of his children – to suicide.

Diving into cold water, he says, helped him overcome his pain.

Apparently, even if you don’t have access to snowy mountains, just a cold shower will do to push our minds and bodies to the limit.

Are you looking forward to watching the oh-so-cool Freeze the Fear cast? Leave us a comment on our Facebook page @EntertainmentDailyFix and let us know.