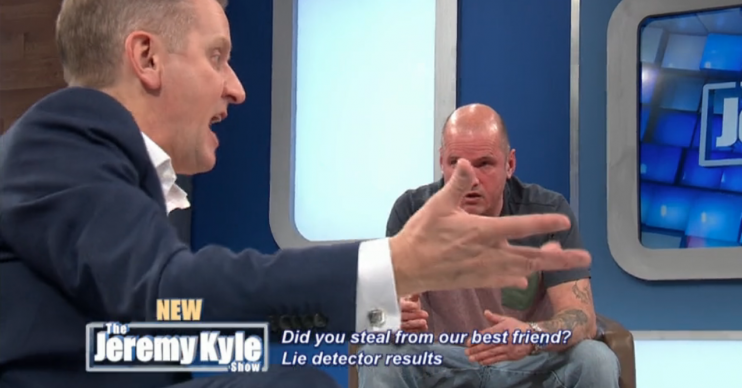 Host did not seem impressed with how speed his bouncers reacted

Jeremy Kyle gave his minders a dressing down during today’s episode after an irate guest appeared to go straight for him.

The talk show host, 53, told his security staff to “have a word” with themselves after the lively moment, in which a man called Jazz – who seemed rather worked up – came onto the stage earlier than expected.

“Who said he could come on?!” Jez wailed as the man stormed from backstage.

The segment revolved around accusations made against Jazz in which it was claimed he had stolen from his best pal.

And even though Jazz went out of his way to offer his hand to both Jeremy and his accuser when he was later brought back – in keeping with when he was originally expected – in front of the cameras and the studio audience, his initial entrance had seemed rather fierce.

A huge bouncer called Dan managed to put himself between Jazz and Jeremy just before they ended up nose to nose.

“Get off, go away!” Jeremy yelled as he waved his hand in Jazz’s direction.

And as Dan followed Jazz back off stage, with the invader offering no resistance at all, Jeremy also hurled a few words in his burly protector’s direction, too.

“Dan, do they have to get into my house before you stop them?” he shouted after him.

Moments after mimicking Jazz’s actions by doing a lumbering impersonation, Jeremy continued his rant by aiming it at another security crew member called Steve.

“Dan, Steve, have a word… we’ve talked about this,” Jeremy bellowed.

Addressing Steve on the other side of the studio, Jez asked: “You wouldn’t have let him get that close, would you?”

“Yes I would,” Steve replied with a huge smile as Jeremy swiped at him with his cue cards, pretending to be narked off.

Jazz’s proper introduction to the show also seemed to begin awkwardly after Dan appeared to be caught off guard as he was positioning a seat for the second guest of the segment.

He quickly leaned back to direct a determined-looking Jazz, again apparently heading for Jeremy – and Steve could be seen rushing in front of cameras in case he was needed s back up.

“What’re you walking towards me for?” a giddy Jeremy asked, almost taunting Jazz.

“I was going to shake your hand, you muppet,” came the reply.

– The Jeremy Kyle Show airs weekdays at 9.25am on ITV