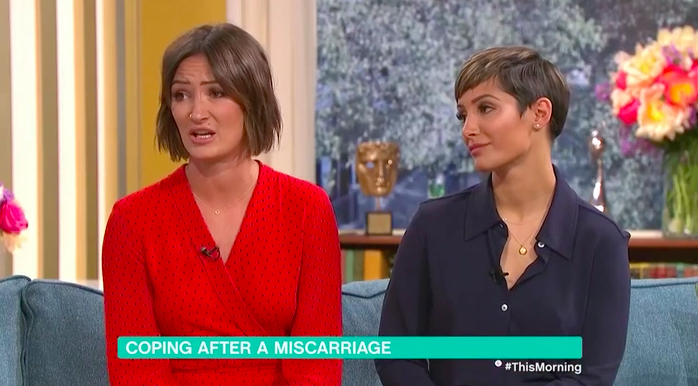 Frankie Bridge has opened up about her own feelings of guilt, after her sister Victoria Cook’s tragic miscarriages.

Appearing on This Morning on Friday (May 10), the former Saturdays singer supported her sister Tor as she described the horror of miscarrying her third baby just weeks ago.

After talking about her heartbreak on social media because she was “lonely” and “looking for support”, Tor was overwhelmed by the messages she received and decided to speak publicly about the issue.

Frankie, in turn, admitted she often “didn’t know what to say” to her sister and her husband James, and was mindful of appearing “blasé” because she has two children of her own.

Frankie, who is mum to Parker, five, and Carter, three, said that she has struggled to find the right words when it comes to comforting her sister.

When Eamonn asked Frankie if she felt guilty, she answered: “It’s been quite difficult to know what the right thing is to say – rightly or wrongly – because I do have two kids, I don’t want to sound blasé about it.”

“But I know Tor doesn’t really feel like that, also she doesn’t want me to feel sorry for her. She’s quite practical. It’s been quite hard.”

Victoria – who is affectionately known as Tor and lives in Bermuda – said that people are usually shocked when she tells them she has had three miscarriages because “no one really talks about miscarriages”.

She also revealed she’s currently having tests and not giving up on her dream to have a child.

Despite living in a different country to her sister, Frankie and Tor FaceTime regularly to chat and give each other support.

MISCARRIAGE ONE – THE EMOTIONS – This is James and I at a wedding in Bermuda, this was straight after the first miscarriage and before we even knew that Bermuda would become our home. Finding out you are pregnant with someone that you want to spend the rest of your life with is the best feeling. We felt excited, nervous, apprehensive but we were also realistic. We knew friends of ours who had had miscarriages, so we knew it was a possibility. However that doesn’t prepare you for when you see that first spot of blood. How can you become so attached to something so quickly, within just a few weeks? We obviously had a rollercoaster ride over the first miscarriage; pregnant, not pregnant, pregnant, not pregnant! However, we didn’t feel like we had lost an actual baby, we were sad that the pregnancy hadn’t worked out and so sad for ourselves that we couldn’t do anything to control it. We chose not to dwell on it and I think thats what helped us, we looked forward and concentrated on the next steps. James hated seeing me go through the physical pain of the miscarriage, he wanted to take that away from me, but I just wanted and needed him there by my side, which he was and always is. A friend recently sent me a quote from @michelleobama book and I think she writes about her miscarriage so well 'a normal biologcal hiccup, a fertilised egg that, for what was probably a very good reason, had needed to bail out' I know that not everyone can feel the way we did and it affects people in very different ways, this was just our way, and it worked for us #miscarriage #miscarriageawareness

For support with the loss of a child contact The Miscarriage Association on 01924 200 799 or visit their website here.