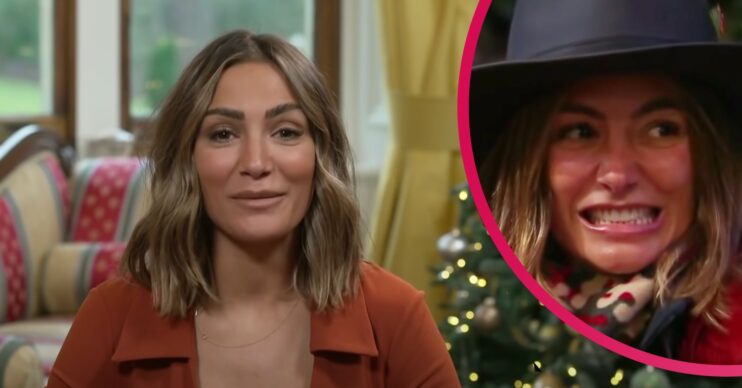 I’m A Celebrity star Frankie Bridge has spoken out about struggling with her mental health while on the ITV show.

Speaking to OK! about keeping her mind calm in the castle, Frankie admitted the “difficulties” she faced during her time on the show.

Frankie, 32, finished in third place and was the last remaining woman in camp on this year’s I’m A Celebrity.

What did I’m A Celebrity star Frankie Bridge say?

Frankie admitted: “It was really difficult. I was shocked at how high the highs were and how low the lows were and how quickly you switch from one to the other.

“That was a struggle, but it was a struggle for everybody. So the way I managed it was by talking because a lot of us were feeling the same. Everyone was so kind in there and we really looked out for each other.”

The singer also spoke about how emotional her reunion with husband, Wayne, and their two sons was.

She said: “It was really emotional. I was just desperate to see them by the time I got home. The boys were lovely, they gave me a massive hug and so did Wayne. It was everything I had imagined the whole time I was in there.”

What else has Frankie said about her mental health?

Frankie, who shot to fame in girl group The Saturdays, has always been candid about her mental health issues.

Back in August she won praise for confessing to the Loose Women panel that, at one point, she felt unable to keep herself alive.

Frankie told her fellow panellists: “I’d been battling for a really long time with depression behind closed doors.

“It kind of came to head when we went to a gig in Dublin and we got to our hotel and I needed to be in the dark. So I just shut all the curtains and got in bed, I just didn’t want to be anywhere else.”

Frankie said that bandmate Mollie King came in and that was the first time any of her pals had seen her in that state.

“It was after that that I couldn’t hold it together any more. I didn’t want to be here any more.

“I’d felt like I’d become Frankie from The Saturdays and then there was this other Frankie, and I’d become two different people.”

Frankie also said that after a video shoot in Iceland and en route to a hospital for treatment, she hit rock bottom.

“I was so ready to hand myself over to anyone who was going to do that for me.”