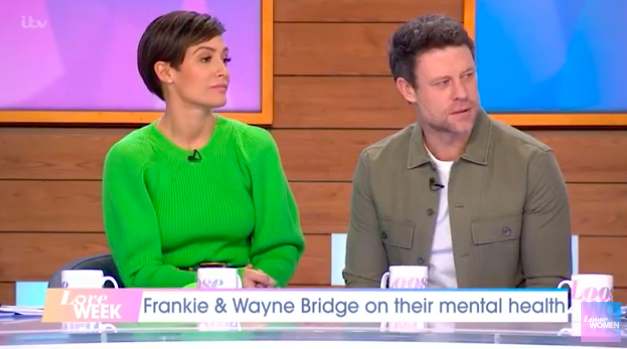 She's suffered with her mental health

Frankie Bridge has felt guilty for having mental health issues as she thinks her husband Wayne Bridge’s life “would have been easier if he met someone that didn’t have problems”.

The former Saturdays singer has been completely open about her struggles with depression and anxiety and in her new book Open: Why Asking for Help Can Save Your Life she documents her journey from the start of her issues to being hospitalised for depression in 2012 through to her life now.

Although Frankie has had unwavering support from Wayne – with whom she has two sons, Parker, six, and four-year-old Carter – she does sometimes wonder what effect her illness has had on him.

In a joint appearance on Loose Women, she said: “For Wayne, I often feel, I love him, of course, he’s my husband, but I think his life would have been easier and a lot nicer if he met someone that didn’t have mental health problems.

“It was a massive learning curve for you, you lost a lot of weight around that time.”

Happy 5 year wedding anniversary to us @waynebridge03 … our version of a weekend away has definitely changed over the 9 years we’ve been together! #family #love #anniversary

Former Chelsea soccer player Wayne, 39, knew very little about mental health problems before he embarked on a relationship with Frankie, 31, but it was one day when the pop star had a breakdown over him buying her the “wrong yogurt” that made him realise she needed professional help.

Recalling that day, he said: “I didn’t really know about [Frankie’s depression] at the beginning … I know she was in a band and at times she found it hard. But it was just one day I was like, ‘you need help’, so we called a GP.

“I wanted to help, but I never had the answers, she had to sort it out on her own – which was hard because you feel you’re not wanted.”

Frankie added: “There was quite a build-up, but you bought me the wrong yogurt and it tipped me over the edge.”

Read More: Loyal dog stays by the side of its dying owner after he was hit by falling tree during high winds

Wayne has also had sessions with his wife’s psychiatrist and that has helped him understand more about Frankie’s illness and helped them both communicate better as a couple.

The ex-sportsman shared: “We have been together 10 years now. And I’d say really only the last few years we’ve got good at talking to each other.”