The final is just days away

According to The Sun, two couples have been dumped from the island ahead of Monday’s finale.

During last night’s show, bosses gave viewers the power to decide which islanders they wanted to see go.

Fans were asked to vote for their favourite couple via the show’s app.

Those who received the least votes were put at risk of being dumped.

Ent Daily has contacted reps for Love Island for comment.

Last night’s episode was explosive after Anna Vakili and Jordan Hames had a huge row.

A few days ago, Jordan had asked Anna to be his girlfriend however he recently admitted he has feelings for India Reynolds.

Last night, Jordan pulled India aside to tell her that he fancied her.

Jordan told India: “Just wanted to pull you because, this is a bit of a tough conversation to have with you but we need to have it.

“Obviously I know that you are getting on with Ovie, I’m not trying to get in the way of that, but I feel like I just need to get some of this off my chest.

“I feel, like, over the past couple of days I’ve found myself gravitating towards you and looking forward to bumping into you in the kitchen, washing up and stuff.”

India replied: “Obviously I talk to Ovie and I talk to some of the other girls. But other than that, you’re my mate in here.” 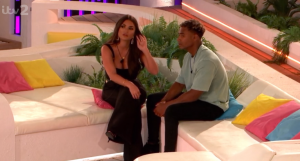 Anna was furious over the conversation and fumed at Jordan: “You like her?”

Jordan replied: “I’m having a conversation with her. I never said that I like her.”

Anna said: “That’s what Maura’s just told me. You just asked me out and you like her?! Is that how much of a [expletive] idiot you are?”