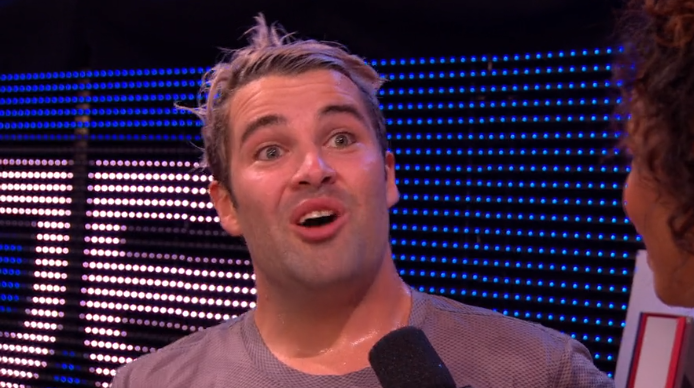 The singer, who was crowned winner on the ITV show back in 2009, attempted to complete the tricky obstacle course.

He started off relatively well, but sadly didn’t get close to cracking it and ended up getting soaked.

Bad luck @joemcelderry91. You may have the #XFactor, but it takes a lot to have the N.I.N.J.A Factor. 🎤 #NinjaWarriorUK pic.twitter.com/3WExG2fFYn

Surprised by his appearance, viewers took to Twitter as the ITV show aired.

“As if Joe McElderry has just been on Ninja Warrior,” one fan wrote in disbelief.

A second shared: “So Joe McElderry has resorted to being a contestant on Ninja Warrior ninja,” and added a crying emoji.

As if Joe mcelderry has just been on Ninja Warrior 😭😭😭😂

Though not everyone was as harsh, with another praising him for giving it a go: “Well done Joe for trying, I couldn’t have done it.”

The singer, who sold two million records as a solo artist, was also sporting a very bright platinum hair ‘do for his appearance, a style he first debuted last year.

The look divided fans, with some comparing him to “Gary Barlow in the 90s” while others said blonde “wasn’t his colour”.

Joe, 27, will be performing an intimate concert for fans at The Other Palace.

The singer won the show in 2009 under the guidance of Cheryl. Olly Murs came in second place, while Stacey Solomon was third.