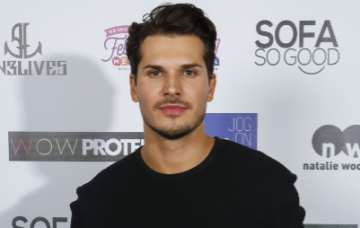 He's got some ideas on spicing up the show...

Former Strictly Come Dancing star Gleb Savchenko has suggested the BBC should make some changes to the show.

In a new interview with The Sun, he claimed the Strictly professional dancers should be given pay rises and same-sex couples should be introduced to the programme.

Of his fellow pros, he said: “They don’t get paid enough. They should triple it. The amount of work we do is unreal.”

The Russian dancer left Strictly to join the US version, Dancing With The Stars, and he claimed the BBC could learn a lot from its format.

He thinks the American series is more exciting because it isn’t as “reserved” and “conservative” as the British family show, and there’s a lot more atmosphere at the final.

He also said on the US version, the stars always have microphones on them and are filmed with hidden cameras the whole time during rehearsals so there’s “nowhere to hide” if romance is in the air!

Gleb suggested adding this element to the BBC version could certainly spice up the show, especially as numerous celebrities have gotten together with their professional dance partners over the years.

Gleb revealed he is open to the idea of returning to Strictly – and he has a few more ideas on how the show could be improved.

“I would love to see same-sex couples. It would be amazing, it would be huge entertainment… I’m very open-minded and I wouldn’t mind doing it,” he said.

The matter was raised with the BBC last year after contestant Rev. Richard Coles said he would have liked the chance to dance with a man, while judge Craig Revel-Horwood said he backed the idea.

However, the BBC released a statement at the start of the last series to say: “Strictly has chosen the traditional format of mixed-sex couples and at the moment we have no plans to introduce same-sex couples in the competition.”

The broadcaster has not yet revealed which professionals will take to the dance floor this year, other than to confirm they have not renewed Brendan Cole’s contract.

Meanwhile, it was recently rumoured Shirley Ballas has agreed to return as head judge, following her debut on the show last year.

Shirley, 57, joined the hit show in 2017, taking over from Len Goodman as head judge, joining Craig Revel-Horwood, Bruno Tonioli and Darcey Bussell on the panel again.

A BBC spokesperson told ED!: “We never comment on speculation. The judges line-up for the next series will be announced in due course.”