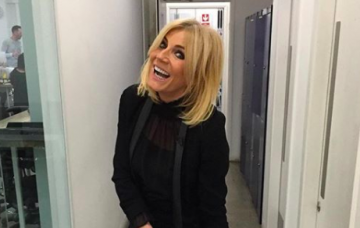 This would be amazing

Every year, soap star Michelle Collins is rumoured to be appearing on Strictly Come Dancing, and every year we’re disappointed – but this year might be the one!

The EastEnders and Coronation Street actress tells New! magazine: “Every year people ask if I’m doing it and I’ll say no. Then they’ll say, ‘Go on, do it! Do it! Why don’t you do it?’

“I’m getting to the point where I’m like, ‘You know what? If they ask me, I might actually do it!’ People drive me mad asking, so who knows? I haven’t been asked yet but it’s early days… we’ll see!”

The 56-year-old who has her own skincare range called Pellum Vero, revealed the reason why she’s always said no.

She said: “I can’t really dance. My biggest fear would be getting eliminated in the first week – it’d kill my ego!”

It’s not the first time Michelle has spoken out about being asked to do Strictly.

She told ITV’s Lorraine last year: “I don’t know, I don’t know. I suppose you have to say ‘never say never’ with those sort of things.”

The veteran soap star, who played Walford’s Cindy Beale, is a member of the political party, the Women’s Equality Party.

She campaigns for women’s rights and recently complained about the double standards she faces about her relationship.

The actress is dating Mike Davison, 34, and told the Daily Star that she’s fed up with people focusing on the 22-year age gap.

She added: “It drives me mad. People call him my toyboy beau. He’s nearly 35, for God’s sake.

“He turned to me the other day and said, ‘Surely I’m not still your toyboy, am I?'”

Michelle, who also starred as Stella Price in Coronation Street, said: “I laugh about it now but it is annoying.

“And I hate that word cougar. I can’t stand it. I find it so demeaning. A cougar is a predator going around looking for young flesh. I’m certainly not like that.”

Who would be your dream Strictly signing? Leave us a comment on our Facebook page @EntertainmentDailyFix and let us know what you think!