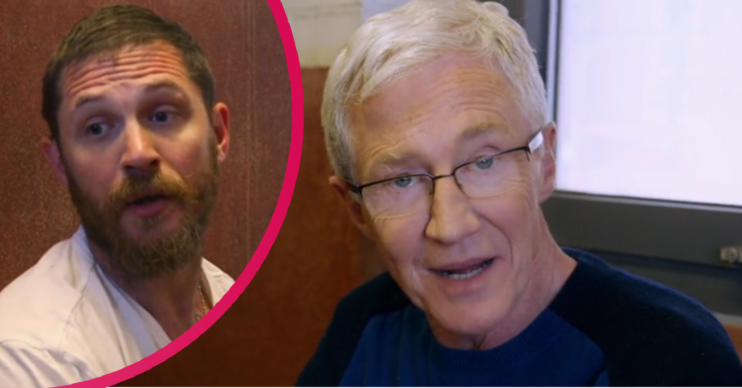 For the Love of Dogs: Viewers swoon as Tom Hardy comforts stressed out pooch

Paul O’Grady For the Love of Dogs viewers were swooning last night as Tom Hardy appeared on the programme.

During Wednesday’s (July 29) episode of spin-off series What Happened Next, the Hollywood heartthrob was on to comfort a distressed Staffordshire bull terrier cross.

Sidney, a former resident of Battersea Dogs & Cats Home, was back because his owners had to move away and couldn’t look after him any more.

What happened with Tom Hardy on Paul O’Grady For the Love of Dogs?

Host Paul said on the show: “It’s always sad to see a dog returning here, especially one as popular as Sidney.”

Unfortunately, Sidney struggled to settle back in, despite his familiar surroundings.

Soon after coming back, he started to pace around his kennel and became so stressed he ripped up his bed. They even had to operate on him, after he swallowed plastic from one of his toys.

Read more: Paul O’Grady reassures fans on the future of For The Love Of Dogs after filming is suspended

Actor Tom Hardy, who famously loves dogs and is a regular visitor at Battersea, came in to cheer Sidney up.

As Paul explained that the poor pooch gets more stressed than most when confined to kennels, Tom stroked Sidney and cooed: “Hello mate.”

He then said to Paul: “He’s a top dog. He’s the poster boy at Battersea? This is such a smart dog that if he gets bored, he’ll want to play and he has a mad half hour and then just chills.”

And it seems Sidney wasn’t the only one, as viewers at home were overjoyed to have Tom on their screens.

One said on Twitter: “Can you imagine being a member of staff at @Battersea_ and Tom Hardy coming in for a play with the dogs? I’d be following him round, wanting to be taken home and drooling more than the dogs #pogdogs.”

Another tweeted, with a string of heart-eye emojis: “Tom Hardy on #pogdogs.”

Drooling more than the dogs.

Someone else said: “Sidney and Tom Hardy on #Pogdogs @itv @RealPOGDogs. Great show, lovely dogs, and a fabulous actor. And Paul O’Grady is brilliant too!”

A fifth wrote: “When you’re watching a programme about Battersea Dog’s Home and you’re already in seventh heaven and then… Tom Hardy turns up to visit them #pogdogs.”

“Tom Hardy, love him more for loving dogs,” said a sixth. “And to do visits too, fantastic. Lotta respect. #pogdogs.”

Another quipped: “Can I foster Tom Hardy though? #pogdogs.”

“Oh Sidney… I’m so so jealous,” someone else confessed. “Kissing Tom and oooooo so many folks wanting to be a pooch right now lol #POGDOGS.”

Can I foster Tom Hardy though? #pogdogs

For the Love of Dogs went on to reveal that Sidney did, thankfully, find a forever home – although he had to have an eye removed. His new owner, Sarah, explained it was because of a glaucoma.

What did you think of last night’s For the Love of Dogs? Leave us a comment on our Facebook page @EntertainmentDailyFix and let us know.