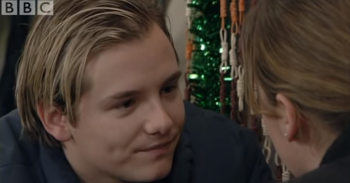 Jack Ryder will soon be making his much-anticipated debut on BBC medical drama Holby City, and here’s a first glimpse at his character.

The actor, 37, will be joining the cast as Evan Crowhurst, the on-off boyfriend of fellow newcomer Chloe Godard, played by Olivier Award nominee Amy Lennox.

Chloe was a doctor at neighbouring hospital Capel Cross, who arrived at Holby to help her mother Ange, played by Dawn Steele, with patient Holly.

Top surgeon Evan follows Chloe to try to convince her to take their relationship seriously.

BBC viewers were left sobbing on Christmas Day in 2002 when the heartthrob was sensationally killed off.

Jamie – the cousin and godson of Phil Mitchell – was knocked over by love rival Martin Fowler, leaving fiancée Sonia Fowler in despair.

The same year, Jack married Kym Marsh, who was then known for being in Popstars band Hear’Say. After seven years as a showbiz power-couple, they divorced in 2009.

Since then, Woolwich-born actor Jack has mainly been away from the spotlight, working behind the scenes as a writer and director – although he did have a cameo in Holby in 2012.

On joining Holby, Jack said: “I am delighted to be joining Holby City and look forward to working with such a talented group of people. I can’t wait to give a voice to this exciting new character and serve a show that people love.”

Executive Producer of Holby City and Casualty, Simon Harper, revealed the show had wanted Jack to join the cast for a years, saying: “We’ve been talking to Jack for a while to find the right part for him on Holby and his powerful, nuanced audition for Evan blew us away.

“He’s both a household name and a superb actor, and fans who remember him as Jamie in EastEnders are in for a big treat and quite a surprise seeing him in this very different role.

“Evan is a complex, alpha surgeon who makes some major waves in Holby.”

Holby viewers will see Jack’s character Evan on screen for the first time on Tuesday 19 March.

Are you looking forward to seeing Jack onscreen? Leave us a comment on our Facebook page @EntertainmentDailyFix and let us know what you think!