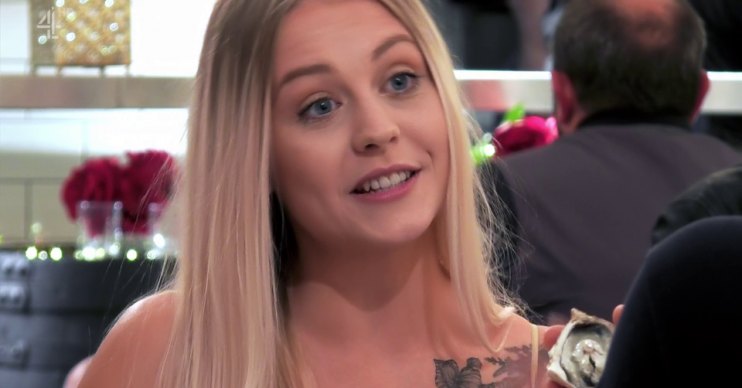 The woman had painted the model to look like an oyster

First Dates viewers couldn’t believe their eyes when a woman presented her date with a sculpture of her vagina painted to look like an oyster.

Artist Shannon had made the mould of her private parts look like an oyster so her date Zander didn’t realise that what he was looking at was in fact a lot more intimate than he first thought.

Shannon, 23, presented Zander with the artwork on the Channel 4 dating show explaining that is was one of her most prized pieces.

Heavy metal singer Zander, 28, politely examined what he thought was an oyster before Shannon explained he was actually holding a mould of her vagina in his hands.

“Wow. Really?” was all poor startled Zander could manage to respond before Shannon explained further.

The intimate piece was part of an exhibition of Shannon’s artwork.

“I had twelve oysters and people were looking at them and they then they clocked that it was a vagina,” she explained.

“I wanted to do my ex-boyfriend’s penis as a banana but he wouldn’t let me,” she added.

Poor Zander didn’t know where to look before Shannon asked what he thought of her oyster vagina.

I wanted to do my ex-boyfriend’s penis as a banana but he wouldn’t let me.

Laughing, he replied “bit weird” before adding, “I didn’t realise I’d see this much of you on a first date!”

Viewers couldn’t believe what they were witnessing either with one writing on Twitter: “‘Hey nice to meet you, here’s a cast of my [expletive] I made to look like an oyster.'”

Another said:”‘Here’s a cast of a vagina I’ve sculpted into an oyster’ I say to the passenger on the bus I’ve trapped on the window seat next to me.”

Another joked: “Something to keep your Oyster card in.”

Shannon, who is also a fan of taxidermy, went on to joke that she didn’t want to “mould Zander’s penis”, which must have come as something of a relief.

Despite Zander finding the situation weird, the couple did sneak a kiss and also ended up going on a second date.