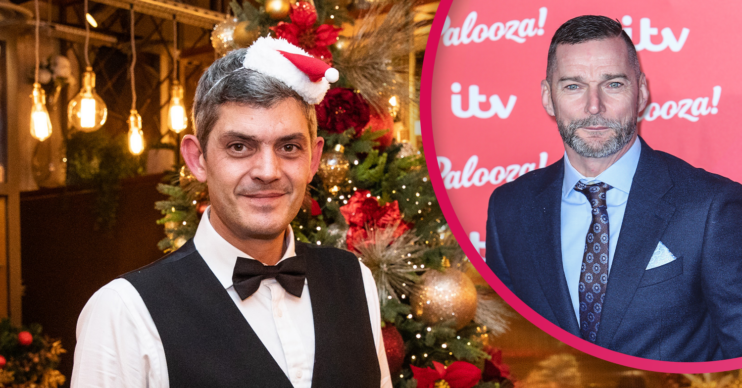 He is currently battling bowel cancer

First Dates star Fred Sirieix has shared his support after his co-star and friend Merlin Griffiths shared some devastating news ahead of Christmas.

As and of the Channel 4 dating show know, it’s been a tough year for Merlin.

The First Dates barman revealed he was diagnosed with bowel cancer back in September.

He has now been dealt a new blow.

Merlin took to Twitter to reveal what he called “appalling” news.

It comes as the COVID Omicron variant spreads like wildfire, with many scared Brits cancelling Christmas parties and dinners out.

And it’s this that has affected Merlin, who runs the Dog and Gun pub in Walton, Leicestershire.

Taking to Twitter, he posted: “All our bookings have now cancelled. Might just close the pub for Christmas. This is appalling.”

All our bookings have now cancelled.
Might just close the pub for Christmas. This is appalling.

Clearly keen to raise awareness of his pal’s plight, Fred retweeted the message so that his followers could see.

Fans and fellow publicans also rallied round to show their support.

One said: “Aw man, that’s awful. Really feel for you and the team. Hopefully your voice and platform will help push forward the much-needed support our industry needs.”

Another added: “I am so sorry. You and so many others have been badly let down.”

A third commented: “Sorry to hear this Merlin. Surprised others aren’t trying to snap up the availability!!

“We have not cancelled our Christmas meal out, all being extra cautious to ensure none of us pick anything up so that we can enjoy family time and support a local establishment.”

How is Merlin doing with his cancer battle now?

Merlin hasn’t given much of an update on how he’s feeling for a while.

However, he has shared pictures to Instagram of him filming First Dates with Fred, and enjoying lunch at a Chinese restaurant with his pal.

When he was diagnosed, doctors told Merlin he had a 75% chance of surviving past five years, and that he would have to endure a year of treatment.