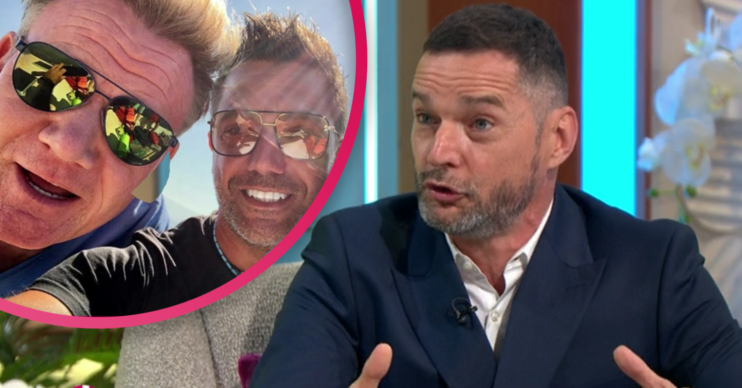 It came while they were filming Road Trip

And, in what will surely come as a blow to fans of the show, Fred revealed the new series will be shorter than the last.

What did First Dates star Fred say about Road Trip?

Fred revealed that working with Gino and Gordon is a little “crazy”.

“You have no idea. It’s crazy,” he told Lorraine.

“Gordon is always right. When he is wrong he’s more right. Gino wants to do just what he wants to do. I’m just there in the middle trying to make sense of it all.”

Why has this series been cut short?

Lorraine then asked about reports this series of the show had to be cut short.

Fred revealed: “We were in Egypt and had a bit of a COVID scare and it was a bit of a difficult situation so we had to come back.”

He added: “It was a bit of an emergency flight we had to take, sadly.”

Read more: Is Fred Sirieix married and does he have children?

Speaking about the new series, which airs this month on ITV, he did say the trio had a “great” time filming in Greece.

“It was great when we were in Greece,” he said.

“We had two fantastic weeks there, and it’ll be on TV very soon.”

Gino, Fred and Gordon headed to Egypt after filming in Greece.

Why were Fred, Gordon and Gino in Egypt?

However, a TV insider has revealed that when they landed there was a COVID outbreak.

And, they said, “it soon became apparent the Egyptian production team were not taking the protocols as seriously as they should”.

They added that fiery chef Gordon “pulled the plug on the advice of the show’s producers after some frantic calls to ITV”.

The trio and the rest of the crew then flew back to the UK and headed straight into quarantine.

The new series of First Dates starts tonight (September 6) on Channel 4 at 10pm.

Will you be watching? Tell us on our Facebook page @EntertainmentDailyFix.