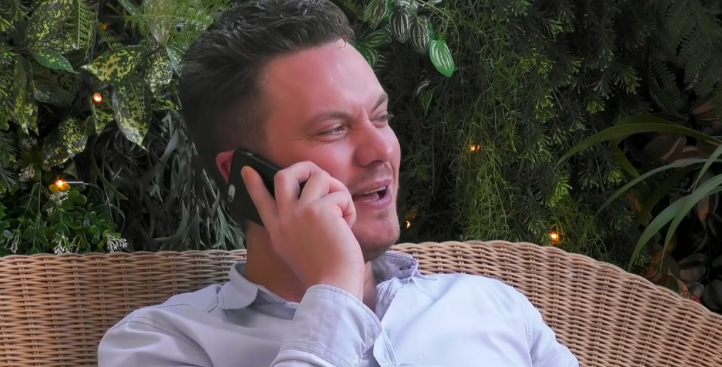 First Dates star Leigh should probably go into hiding for a while, after his “deluded” comments left viewers LIVID.

The single – with good reason it turns out – football fan arrived at the First Dates restaurant last night (May 7) for a blind date with Becky.

And soon enraged those watching from home with his rude comments and ignorant behaviour.

Perhaps he should have stayed at home?

When Leigh was first introduced to mum-of-two Becky, 36, things seemed to start quite well as the pair appeared to have much in common.

However, viewers were shocked when chef Leigh, also 36, later revealed that he would have preferred her to be a foot taller and “slimmer”.

Read more: First Dates star reveals he wants mum to go on show as “she needs to find a man”

The Manchester United fan also insisted on pausing the date regularly to check the scores of a football game.

Meanwhile, fans fell for social worker Becky’s positivity, despite her husband cheating on her.

She told the camera she’d never had time to wallow in self-pity following the break up of her marriage, because she didn’t want her heartbreak to “spill over into the tiny little hearts of her children”.

Viewers were disgusted as Leigh snuck outside for a cigarette, and phoned a friend to get an update on the football match.

After finding out the score, the cad then gave his date her own score, claiming she was a six and a half out of 10.

This on top of admitting he’d prefer a “slimmer” woman who was “taller”.

Fans unleashed their anger at Leigh, who they accused of being “deluded”, “bad mannered” and “rude” – and they are the few we can print. The rest were too sweary!

One wrote: “OMG. I mean seriously OMG. Becky was gorgeous. Six and a half??? More like 10 and a half. She deserves a man to treat her like a proper lady. #FirstDates.”

He's literally a man child. What an absolute embarrassment to males everywhere. #firstdates

Oh dear, bad manners in force on @Channel4 #FirstDates – how many times does a bloke need to check his phone for the football score?!#bettermenoutthere #chivalryisdead #punchingabovehisweight

OMG. I mean seriously OMG. Becky was gorgeous. 6 and a half??? More like 10 and a half. She deserves a man to treat her like a proper lady. #firstdates

Lee is 6.5 nethanderal. ! Becky is so pretty and lovely, dodged a bullet there! What an misogynist pig 🐽 ! #firstdates

Someone a bit taller and a bit slimmer? There’s a reason you are on your own pal.

Another typed: “Oh dear, bad manners in force on @Channel4 #FirstDates. How many times does a bloke need to check his phone for the football score?!”

A third blasted: “Lee is a complete and utter [bleep]. Becky is stunning and deserves better than that arrogant idiot #FirstDates.”

“Honestly… Leigh, you want a girl who’s a bit taller and slimmer? She is beautiful. Not like you busting out of your shirt, what a [bleep]!” seethed another.

One more wrote: “Lee is a 6.5 neanderthal! Becky is so pretty and lovely, dodged a bullet there! What an misogynist pig.”

Thank you all so so so so much for the kind and thoughtful comments ❤️ it’s hard to bare your soul so cheerrsss buddies 🥰 #firstdates #becky #firstdatesbecky #thankyou #❤️ pic.twitter.com/cGANyDVanQ

After the show went out, Becky experienced an outpouring of love and later thanked fans for their support.

She tweeted: “Thank you all so so so so much for the kind and thoughtful comments. It’s hard to bare your soul so cheers buddies #FirstDates #Becky #FirstDatesBecky #ThankYou.”

Thankfully, despite things not working out with Leigh, Becky will be on next week’s episode in another bid to look for love.

What did you think of football mad Leigh? Leave us a comment on our Facebook page @EntertainmentDailyFix and let us know what you think!