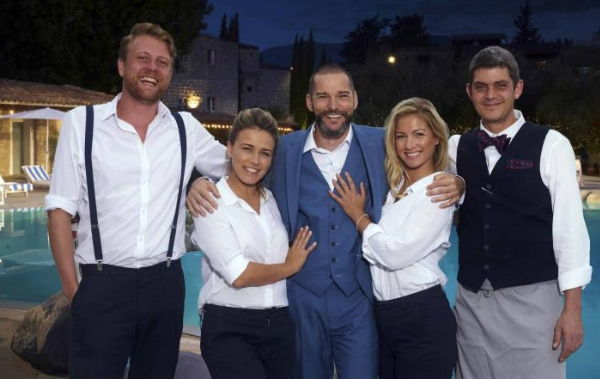 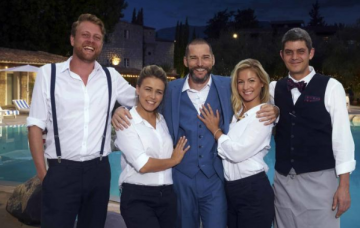 And so was his date

We all want to make the best impression on a first date.

But the pressure is really on when you’re appearing on a TV dating show.

As well as your prospective partner, millions of other people will be watching and judging.

First Dates Hotel contestant Paul Bowen has been bald since the age of 20, and now wears a wig.

But the 28-year-old decided to come clean about his cover-up during his date with Kimmie in last night’s charming episode.

“There’s something I have to admit, I will just tell you now just to get it over with,” he said. “My hair is a wig.”

Kimmie wasn’t remotely thrown by this and replied: “That is one of the best wigs I’ve ever seen in my life. So your hair fell out?”

Paul, a pie maker from Lancashire, explained: “By 20 years old it was pretty much gone. So I went to this clinic and I said I was thinking of a hair transplant, but he said, ‘Sorry Paul you’re too late for a hair transplant it’s too far gone.’

“The only option for you is a non-surgical hair piece and I just went, ‘A [bleeping] wig?!’

After he revealed a pic of what he look like without his crowning glory, Kimmie, 30, assured him he looked good both ways.

He confided about a disastrous encounter with a woman in the past, explaining: “Girls say having no hair doesn’t matter, but I’m telling you it does. You can put a fancy shirt on but there’s always something missing.

“I was actually at the bar and I was chatting with this girl, I bought her a drink and she took it then at the end of the night I asked if I could get her number and she said, ‘No I don’t date bald people.’

He needn’t have worried about the brush-off from Kimmie though, as she agreed to see him again.

She told him after the date: “I appreciated how honest you were straight away about your baldness, it’s how you should be, it was nice.

“Not a lot of people are like that nowadays. You were really brave to be honest.”

The audience was smitten with the pair of them…

@FirstDates makes me so happy 💕 I adore Paul! 😍

Paul the Pie Seller is an absolute sweetheart #FirstDates

Some viewers weren’t happy that they weren’t given a proper update on the current status of Paul and Kimmie at the end of the show though. All we were told was: “Paul is hoping he’s found the missing piece of his pie.”

But we want to know if there’s a Happy Ever After.

Eh @FirstDates where do you get off leading us on for an hour and not letting us know if Paul ever took his wig off for Kimmie? We need to know! #FirstDatesHotel

I need a better update on Paul and Kimmie…. are you on here?🤞🏻 #firstdates #firstdateshotel

I need a better update on Paul and Kimmie…. are you on here?🤞🏻 #firstdates #firstdateshotel

Are you annoyed that the show doesn’t update on whether the couples have seen each other again? Ent Daily has contacted Channel 4 for news.