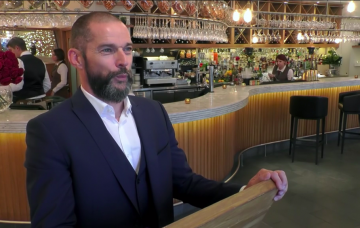 She couldn't stop bringing it up afterwards

Dates are awkward at the best of times, but the cringe-factor hit new levels during a controversial episode of First Dates.

Viewers were divided – with many furious – when a young woman named Bianca got angry at her date, Daniel for suggesting they split the bill.

Is it old fashioned to expect a man to pay? #FirstDates pic.twitter.com/y93k5m89c3

The couple initially seemed fairly compatible, as driver Daniel – who has been single for 14 months and has three kids – and Bianca, 31, laughed over their steaks and shared their spotty dating history.

But when the waiter came over with the bill, things took a serious turn.

Mum-of-five Bianca looked at Daniel expectantly as he examined the price and looked aghast. He then stuttered: “How do you want to do this?”

She looked surprised, pulling a face and initially staying silent.

After a moment, the poor waiter said: “You going halves, yeah?” Bianca, again looked appalled, pulling a face at Daniel, who said: “Is that alright, yeah? Is that bad, is it?”

Eventually she said coolly: “It’s fine,” but she looked cross as it came to around £45 each. Bianca then laughed awkwardly as Daniel paid extra, handing over £35 in cash and putting £20 on his card.

“You got enough?” he asked her after some more silence.

“‘Course I have,” she replied, adding scathingly: “Just in case I went on a cheap date…”

Daniel pulled a face as the waiter tried to smile through his pain. Bianca then said to the waiter: “I’m sure you wouldn’t make me pay for my meal, would you? He’s a cheeky one isn’t he?”

In the VT after, Bianca said: “Little things show a person’s character…

“Do you know what it was, right? I’ll be honest with you. I don’t need someone to pay for everything for me… which is good because you didn’t… It’s that sort of generosity in a guy that I’m looking for.”

He replied: “As long as I didn’t come across as a jerk, it’s a learning curve innit? I did ask my friends, ‘Do I pay for it all?’ They were like, ‘Nah it’s the modern world now’.”

She acknowledged: “We’re not in the 1950s anymore but what I’m looking for is that kind of guy…”

She was still going on about it as she left and got in a black cab, telling the driver: “I would’ve preferred a man that paid for my meal, but what can you do?”

The taxi driver replied: “I can’t believe that.”

Viewers watching at home were divided by the conversation.

Many thought Bianca’s behaviour was outrageous, with one commenting: “This has annoyed me, women fighting to be treated with respect and equality etc yet she expects the guy to treat her the old fashioned ways. Can’t have it both ways love. Equality is for everyone.”

Another wrote: “As a woman, it annoyed me too. We can’t cherry pick what we want equality about.”

A third quoted Bianca’s own comment back to her, saying: “‘Little things show a person’s character’ – Yeah, like EXPECTING the guy to pay for the whole meal. No thank u, next.”

A fourth added: “It’s completely unacceptable to go on a date and expect the other person to pay for you (regardless of their gender). If someone offers that is different but no one should have a sense of entitlement especially when the other person is essentially a stranger.”

Others pointed out that it’s not like he even asked her out, tweeting: “Split the bill. She applied to go on the dating programme so it’s not even like he asked her out specifically! Poor [bleep].”

Another joked: “If two women go on a date, does no one pay?”

Many cringed over the awkwardness the waiter had to endure, with one writing: “The waiter was about to pay for it himself just to end this madness 😂.”

Another added: “Lol the waiter just standing there.”

A few defended Bianca, with one man writing: “I would always pay. Especially on a first date. Unless the date insisted on going halves in which case I would think she didn’t like me.”

A second commented: “It is lovely if a gentleman chooses to pay for your meal.”

A third added: “I think @Channel4 should pay. It’s for our entertainment 📺.”

Whether you think he should’ve paid or not, there’s no denying Channel 4 know how to provide entertainment…

Do you think men and women should split the bill on a date? Leave us a comment on our Facebook page @EntertainmentDailyFix and let us know what you think.