The chief fire officer of Lincolnshire Fire and Rescue has appeared on Good Morning Britain to talk about the service dropping Fireman Sam as its mascot  - and viewers are fuming.

On today's (11.09.19) episode,  Les Britzman spoke about the beloved children's character being outdated and suggested he should be known as Firefighter Sam to be more inclusive.

Having dropped him from its promotional materials, the fire service will instead use its own mascots - two cartoon fire extinguishers called Freddy and Filbert.

Fireman Sam has been dropped as the face of Lincolnshire Fire Service in a bid to make the fire service more inclusive.

Is the character outdated? Share your thoughts and vote in our poll. #GMB pic.twitter.com/V4elJtAZ28

On GMB, Mr Britzman explained: "The character itself is outdated, the programme itself is probably fairly up to date.

"I think the producers would probably get more fire and rescue services wanting to use the character and the programme if they brought themselves up to date a bit, that's all we're asking. We're trying to save people's lives here, not be politically correct."

Speaking further he said the reason more women aren't in the fire service is "because of images like Fireman Sam". 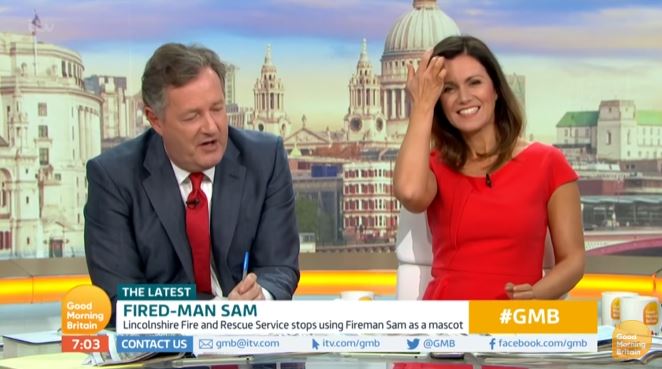 He asked Mr Britzman: "The two fire extinguishers Freddy and Filbert, are they male or female?"

When the fire chief struggled to answer, Piers pressed him: "Are Freddy and Filbert traditionally male or female names?"

I have never heard anything so ridiculous in all my life.

He admitted they are male names and Piers ranted: "So you've basically ditched a bloke for two bloke fire extinguishers. You see the problem there?"

On Twitter, Piers mocked the decision and jokingly claimed kids' character Dora the Explorer is "sexist" and "discourages men from becoming explorers". 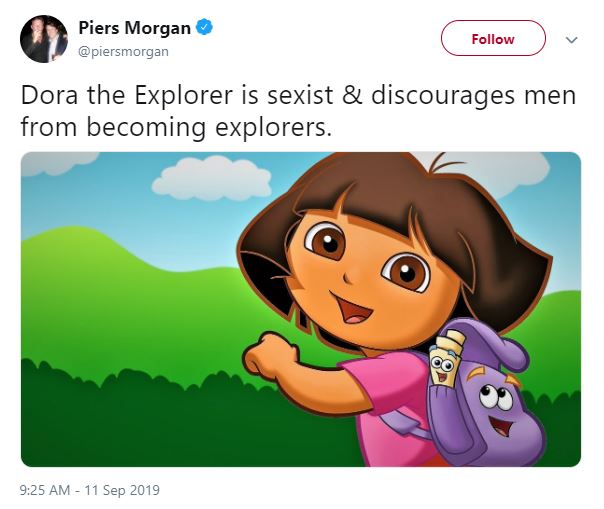 Responding to a tweet joking that Postman Pat might also be in trouble in the near future, Piers raved: "Definitely... I know so many women refusing to join the postal service because of Pat and his sickening male stereotype antics."

GMB viewers also had their say, with most slamming the decision.

One said: "How pathetic. My son loves Sam and he wants to be a fireman just like him. It's not outdated whatsoever."

Another tweeted: "So Lincolnshire fire service is having trouble recruiting because of Fireman Sam?? "

A third wrote: "Yes because adults are going to be motivated by a children's TV programme aren't they..."

"Don't be so ridiculous, #FiremanSam is fine," said a fourth, adding: "If you want to be inclusive, have other firefighters with him that can represent differences."

Others took a different approach to the debate, with one tweeting: "This fireman Sam news is deliberately being reported in a misleading way to undermine feminism and to generate outrage.

"Literally no one asked for this. It's not 'PC gone mad', it was one guy who decided this as an answer to criticism that the dpt was not inclusive enough." 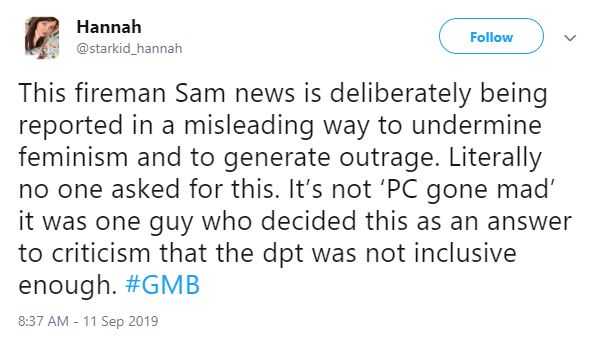 Should the fire service have kept Fireman Sam as its mascot? Leave us a comment on our Facebook page @EntertainmentDailyFix and let us know.