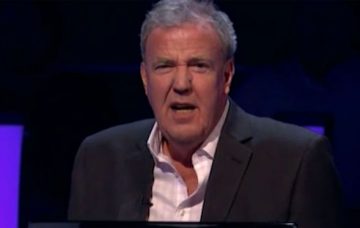 He won't want to watch repeats of that!

Jeremy Clarkson must’ve wished the ground would swallow him up as he wrapped up his stint as host of Who Wants To Be A Millionaire? last night.

In the last of seven special episodes to mark the quiz show’s 20th anniversary, the former Top Gear man, 58, seemed sure of himself as he claimed to know the answer to a question before the computer had shown it.

But the host was left with egg on his face as it was revealed that he was, in fact, WRONG.

Jezza’s guest, Alan Horsburgh, had made it to the £16,000 question, and seemed a little perplexed when asked: “What type of wild animal is an ibex?”

Sadly for the contestant, he’d already used up his Ask The Host card.

That prompted Clarkson to say, smugly: “I’m going to really annoy you now. I know the answer.”

In the end, Alan chose not to trust his own judgement, and phoned his friend Tom, who thought the answer was deer.

Read more: ‘Too slow’ star of The Chase teases quiz retirement as he worries about slipping standards

And Alan’s confidence that his pal was right must’ve doubled as Clarkson boasted: “I’m not even going to look at the screen. That’s the correct answer.”

But the charismatic presenter was left gasping as the computer revealed that the answer was actually GOAT.

And viewers at home soon took to social media to express their shock at the gaffe.

One tweeted: “Did I really just see @JeremyClarkson give the wrong answer on #Millionaire? LMFAO!”

Another chirped: “Clarkson cringing after he was so confident of the right answer has got to be my fave #Millionaire moment ever!!!!! #goat.”

And a fourth fan laughed: “Who Wants To Be A Millionaire is the best TV entertainment in years. @JeremyClarkson is gold.”

The original Who Wants To Be A Millionaire? ran on ITV from 1998 to 2014, with Chris Tarrant in the hotseat during all of that time.

What did you think of Jeremy Clarkson as the host of Who Wants To Be A Millionaire? Leave us a comment on our Facebook page @EntertainmentDailyFix!