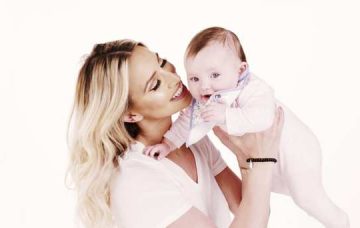 The former TOWIE star has been ticked off...

Her ITVBe fly-on-the-wall series, First Time Mum, has reportedly breached the rules of Ofcom, the UK’s TV, radio and video on demand regulator.

The documentary series followed the reality star as she coped raising her daughter Sunday as a single mum.

However, Ofcom have now stated that the show featured “undue prominence to a baby formula milk”.

Broadcasting watchdog Ofcom have rapped the show for its references to Aptamil, a brand of powdered baby milk.

Read more: Blockbusters is returning to TV with Dara O’Briain as host

In the first part of the programme, which aired in May, former TOWIE star Ferne was seen in a hotel room getting ready for a public appearance, when the camera zoomed in on a number of Aptamil products on a table.

The brand of formula was also clearly visible in other shots and even close ups, although the channel has denied any product placement.

Ofcom told Mail Online: “Consistent with this, we would anticipate that broadcasters take particular care over commercial references for such products and the level of prominence given to them.”

A spokeswoman for the regulator said: “Our investigation found this programme broke our rules by giving undue prominence to a baby formula milk.”

Reality TV fans will know that Ferne is a single mum after becoming pregnant with boyfriend Arthur Collins’ baby.

However, she discovered she was expecting his child after he was arrested and later given a 20-year jail sentence in December 2017 for carrying out an acid attack in a packed nightclub.

She has since broken up with him and is bringing up the child alone.

Ferne is currently filming a third series of the show.

Did you watch Ferne’s show? Leave us a comment on our Facebook page @EntertainmentDailyFix and let us know what you think!