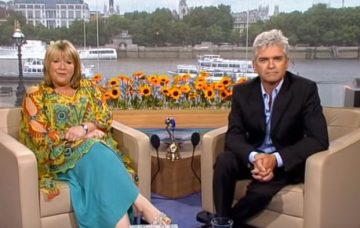 Fern Britton has rubbished historic suggestions that she quit This Morning over an alleged pay gap dispute involving Phillip Schofield.

She presented the ITV daily programme for 10 years until 2009, but reports at the time alleged she and Phillip parted company following rumours of him being paid more for their other programme on the channel, All Star Mr & Mrs.

Fern told Hello! magazine she was not aware of how much Schofield was paid.

She said: “That certainly wasn’t true, not least because I had no idea what Phillip had been paid, I knew what I was being paid and it was more than fair.

“It is appalling that, if you are doing the same job as a man, you are paid less and I am absolutely all for equal pay but at the time, even if Phillip had been paid more than me, he was doing more programmes on television.

“It is wrong for someone else to be paid more than you are for the same job. But it’s terribly important to find out where your ‘enough’ is because everybody’s different and I was very happy with my ‘enough’.”

The former Ready Steady Cook presenter, who is married to celebrity chef Phil Vickery, said she has no plans to return to This Morning.

Having turned 60 last year, she also told of how her confidence has blossomed with age.

Read more: Why Kate Middleton broke the dress code at this year’s BAFTAs

“When I was younger I was always worrying about how people would perceive me and now I have abandoned that. People like me or they don’t and I don’t really give a damn anymore,” she said.

“Of course like all women, some days I think my hair is rubbish and I can’t fit into my jeans but then I think, ‘I am alive and the world is good’.”

Read the full interview in this week’s issue of Hello!

Do you miss Fern on This Morning? Leave us a comment on our Facebook page @EntertainmentDailyFix and let us know what you think!