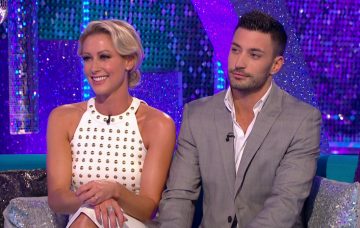 Faye Tozer and Giovanni Pernice ‘clash’ ahead of Strictly final

As the pressure of the Strictly Come Dancing final mounts, dance partners Faye Tozer and Giovanni Pernice have apparently clashed.

Steps star Faye, 43, and Giovanni, 29, have impressed with their high scores throughout the competition.

With so much expectation for them to do well this weekend, the stressed pair have reportedly been complaining about one another.

A source told The Sun: “Faye and Giovanni have been struggling with the pressure and have both been ranting behind each other’s back.”

The continued: “Giovanni is fiercely competitive and wants to win, but he knows they don’t have a hope in hell, as Stacey and Joe are both so popular with fans, Faye is sensitive, and after weeks of relentless training, she is feeling quite emotional.

“They’re hoping they can put on a brave face for the final, but behind the scenes it’s incredibly volatile.”

Read more: Strictly’s Ashley Roberts says she’s mentally prepared herself to be in the dance–off again

Meanwhile, former Pussy Cat Doll Ashley Roberts and her dance partner Pasha Kovalev have had an awkward moment, according to the insider.

Ashley has apparently grown close to Faye’s dance partner Giovanni during the competition.

Despite her insisting they are just “friends”, Pasha has apparently told her to just keep focused on the dancing ahead of the final.

The race is certainly on for them as Ashley, 37, and Pasha, 38, have found themselves in the bottom two for three weeks running.

The judges have opted to save them each time but it means the public vote has not been with them, which will determine this weekend’s winners.

Broadcaster Stacey Dooley and vlogger Joe Sugg are also in the final and they are currently the two favourites to take the Glitterball trophy.

ED! has contacted representatives for Giovanni, Faye and Strictly for comment.

Who do you want to win this weekend?  Leave us a comment on our Facebook page @EntertainmentDailyFix and let us know what you think.