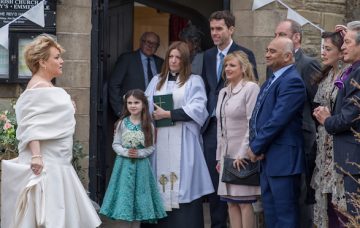 Bob and Brenda weren’t destined to live “happily ever after” it seems, as their (second) marriage lasted less time than it takes to make a nice brew.

Things started badly from the off, when Bob was late for his own wedding after being locked inside a shed for the night (don’t ask!).

When he eventually arrived, it looked like Brenda might be able to forgive her husband for being late – and for his affair with Laurel.

In scenes that aired last night (Thursday 10 May), Bob told Brenda he loved her, and actually seemed convincing. The pair said their vows and the partying commenced – complete with emotional speeches.

And not a sign of Laurel anywhere. In fact, after much soul-searching, she had gone to visit her late-husband Ashley’s grave in a bid to be a better person.

However things started to fall apart when Brenda looked at some of the wedding photos and noticed something that shouldn’t have been there – Bob’s sad face.

In front of his new wife and their friends, Bob was the party clown. But, whenever he thought nobody was looking, the newlywed looked distant.

In emotional scenes, Brenda told Bob she couldn’t pretend anymore and that their marriage was a sham. Convinced he’d rather be with Laurel, she told Bob she deserved better than being second best…

Bob and Brenda: OVER. #Emmerdale pic.twitter.com/ZFHo4dTjYi

Brenda then handed Bob back her wedding ring as he left their home with a bag of his belongings, while a confused Laurel looked on from the street.

Many fans were delighted that long-suffering Brenda had finally given Bob the boot, and many others commented on how little time the marriage had lasted!

One fan wrote: “I feel so sorry for Brenda, I really wanted her and Bob to have a happy ever after.”

Another added: “Poor Brenda she deserves so much better than a lying cheat like Bob.”

A third even suggested that there’s more to come, predicting: “I feel the Laurel and Bob story is not over yet.”

I feel so sorry for Brenda, I really wanted her and Bob to have a happy ever after. #Emmerdale@emmerdale

Good for you Brenda! You deserve so much more… #Emmerdale

A bemused tweeter joked: “Bob and Brenda’s marriage may be even shorter than Chas and Dan’s.”

Another commented: “This has got to be the shortest marriage Since Mel dumped Ian on #EastEnders on the stroke of midnight on #NewYearsEve!”

Many more agreed, collectively calling the union “the shortest marriage in history”.

That was the shortest marriage!! #Emmerdale

THAT WAS LITERALLY THE SHORTEST MARRIAGE IS THE HISTORY OF TV SOAPS MARRIAGES! #Emmerdale https://t.co/CoCUwlMgHN

While Brenda nurses her broken heart, only time will tell if Bob crawls back to Laurel.

Although Laurel had convinced herself that they were over, perhaps the sight of Bob in his unicorn onesie was too much to resist?

Do you think Bob will end up alone, or with Laurel? Leave us a comment on our Facebook page @EntertainmentDailyFix and let us know what you think!