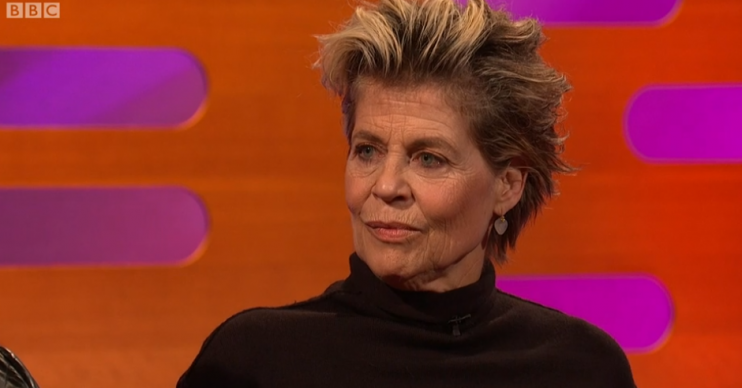 While most agreed she was fabulous, they couldn’t agree on whether she was under the influence or just had a brilliant personality.

Linda was on the sofa alongside Terminator co-star Arnold Schwarzenegger to promote the latest release in the franchise: Terminator: Dark Fate.

The actress discussed various things, including how she didn’t want to appear in the Terminator films at first.

Apparently Linda Hamilton was drunk cos she has a personality!

“I was a snotty New York actress and I didn’t want to go to California.

“It was only when I saw Arnie on set and he was fantastic, that I thought, ‘I’m in!'”

To which Arnold replied: “You didn’t want to work with me? That’s the first time I’ve heard that story.”

While Arnie and Linda’s rapport was clear, many viewers were concerned about Linda’s behaviour and wondered if she’d enjoyed a tipple or two before the show.

@BegumNadiya so impressed with how gracious and funny you’ve been on @grahnort – such a bizarre combination for tonight’s show, you deserve better than listening to drunk Linda Hamilton. #GrahamNortonShow

Safe to say #LindaHamilton is more than pickled

There were others however, who didn’t notice at all – and thought she was brilliant.

One person said it was just because she had a personality, and another that viewers were being too British about it!

I honestly can’t believe some of the comments last night. Apparently Linda Hamilton was drunk cos she has a personality!

Well really enjoyed last nights Graham Norton, and fell in love with Linda Hamilton found her so charming and interesting!

Do you watch Linda on the show last night? Leave us a comment on our Facebook page @EntertainmentDailyFix and let us know what you think!