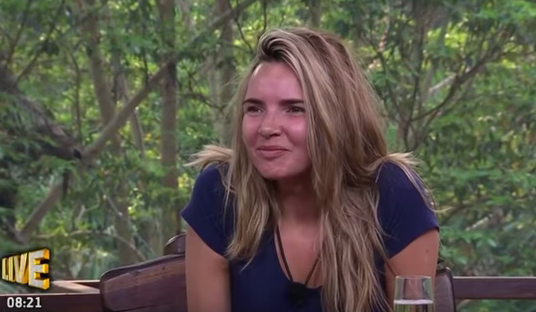 Girls Aloud star got her names mixed up

All that heat and horrible food in the jungle is enough to send those I’m A Celebrity… Get Me Out Of Here! contestants doolally.

And to prove that point, Nadine Coyle got herself in a right pickle in last night’s episode of the ITV show, calling Kiosk Kev the wrong name.

The former Girls Aloud singer, 34, called him KEITH – the name of Kev’s predecessor who was sacked from the show after the 2017 series.

And judging by some of the comments on Twitter, Nadine’s faux pas left viewers at home hiding behind their fingers.

Nadine had just triumphed in the Dingo Dollar Challenge with Jacqueline Jossa when the tongue slip occurred.

The Londonderry-born star began singing: “What has Kiosk Keith got for us today?”

When Nadine says Kiosk Keith instead of Kiosk Kev.

Sadly for her, Keith – real name Raymond Grant – left the show in 2017 due to alleged misconduct.

Kiosk Kev – Mark Herlaar – replaced him last year, with ITV saying in a statement: “Ray is no longer under contract on the show. There are no plans for him to return this year.”

With Nadine being voted off the show last night along with Caitlyn Jenner, it wasn’t exactly the best way for her to bow out.

And fans of the series were quick to have their say on social media.

One viewer tweeted: “Anyone else notice that Nadine said ‘I wonder what Keith has got for us today’ awkwarddddd.”

Another remarked: “When Nadine says Kiosk Keith instead of Kiosk Kev.”

And a third joked: “Nadine left cause she called @KioskKev Keith!”

Anyone else notice that Nadine said “I wonder what Keith has got for us today” awkwarddddd 😬 #imacelebrity #imaceleb2019 #imaceleb pic.twitter.com/9NMHnoXIpP

Despite her mishap, the singer insisted that she’d had a good time in the jungle, telling presenters Ant and Dec: “You know it’s not going to be like staying in a hotel, but it is enjoyable.

And the outgoing contestant made it clear who she wants to win this year’s series now that she herself had been evicted.

She said: “I think Kate [Garraway]. She has worked harder than any other campmate, she always has a trial to do and she does it so well.”