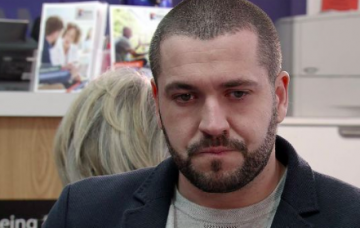 He's got everyone worried...

You can’t have missed the fact that there’s something going on with Aidan Connor in Coronation Street at the moment.

He’s been acting really weirdly; first of all there was his unexplained breakdown in hospital after he gave his kidney to half-sister Carla.

Then there was that bizarre speech he gave Kirk Sutherland about looking after Beth, which sounded like a goodbye to us.

He wasn’t as thrilled as he should’ve been when Carla handed her share of Underworld over to him last week and he’s been acting really shady over a letter.

And you can’t have missed the way he spoke to Eva Price before she left for ‘America’, that was undoubtedly a ‘goodbye’ rather than a ‘see ya later.’

He’s depressed and preparing to say goodbye to everyone

Aidan’s uncharacteristic behaviour could very well be explained by depression and he’s got every reason to feel low. His relationship crumbled and he lost everything. He was even sleeping on the factory floor for a while. He’s pulled himself up now but his run of terrible luck could well have triggered depression. Do the ‘goodbyes’ he’s said to some characters mean he’s thinking about saying goodbye to his loved ones forever? Shayne Ward who plays the factory boss has said Aidan’s exit will be ’emotional’ and this certainly would be that.

WHY IS THERE NOT AN OPTICIANS ON CORONATION STREET? EVA IS PREGNANT. AIDAN IS DEPRESSED. OPEN YOUR EYES.

Aidan’s odd behaviour began around the time he offered to donate one of his kidney’s to Carla. Before the operation he was subjected to a series of tests making sure he could be a successful donor. Could one of these tests have discovered a potentially terminal illness in him?All the hidden paperwork could be him getting his affairs in order before his death. Sob.

Is aidan going to die? #coronationstreet

He’s in debt and is planning on doing a runner

Another popular theory is that Aidan could owe a LOT of money and is in danger if he doesn’t pay it back. He did get into a lot of debt when Eva decided to take him for every penny – she put a brand new Range Rover on his credit card for goodness sake. He did get money when she decided to sell the flat they shared but was it enough? Could he be planning on doing a midnight flit to escape his growing financial worries?

He’s discovered he has a deadly genetic condition

Now we think we’ve worked out what’s going on and we think it involves Eva’s baby. If Aidan really had a terminal illness it is unlikely he would have been able to donate a kidney to Carla. We think he discovered he has a potentially lethal genetic condition and that’s how the truth about Eva’s baby comes out – she has to be tested! We’re predicting a deathbed reconciliation for Aidan and Eva before he passes away cradling his baby daughter. That’s what we’d do if we wrote Corrie anyway!

How do you think Aidan will leave Corrie? Leave us a comment on our Facebook page @EntertainmentDailyFix and let us know what you think!

Strictly’s Caroline Quentin: Who is she and why is she taking part?