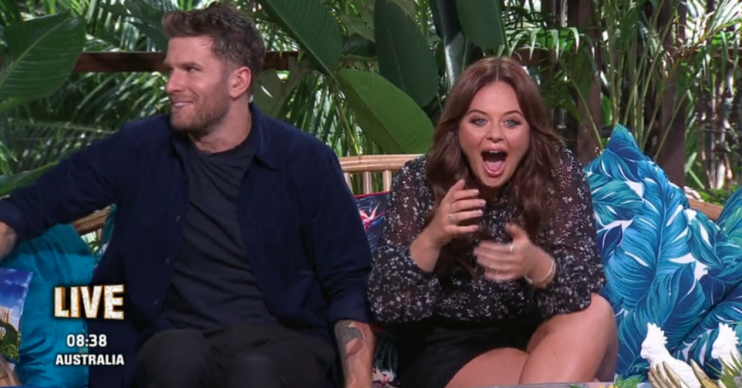 Presenter joked he 'forgot he was on TV' following rude gaffe

Cheeky Adam Thomas joked he forgot he was appearing on the telly just moments after aiming a racy quip at I’m A Celebrity Extra Camp presenter Emily Atack.

In an apparently unscripted moment, hosts Emily and Joel Dommett were reduced to giggles following the x-rated remark which echoed her response to a question about having a crush on Ant and Dec.

But while Joel tried to get the spin off show back in track, Emily took several seconds to compose herself as she whooped and shrieked in disbelief.

And having burst into guffaws at his own gaffe, Adam also seemed flushed as the other guests and crew in the studio bellowed with laughter.

Responding to a question from Joel about which of the Geordie stars they fancied the most, comedian Bobby Mair deadpanned he would like ‘both at the same time’.

Giving her take, Emily intervened – but seemed to decide halfway through her sentence she should stop talking.

I forgot I was on a show!

She responded: “I quite agree, it’s one of those things… oh I can’t say.”

Urging her to continue, Adam said: “Go on Emily.”

But hinting she could have carried on to say something a little too risqué, Emily replied: “I keep forgetting I’m on the telly!”

“You just want [bleep], not Dec!” Adam blurted out, leaving both hosts temporarily gobsmacked and with Joel holding his head in his hands.

“I forgot I was on a show!” Adam pleaded as Joel joked he’d find himself in the newspapers for the blunder.

Reactions from viewers on social media suggested those watching at home were very tickled by the slip of the tongue.

And another chuckling viewer clarified what was said for anyone that may have missed it: “For anyone who wondered what Adam said, it was: ‘You want [bleep] not Dec’ 😂 #ExtraCamp.”

Always sunny with these 2 around ☀️